Alberto is a lucky ‘Cont’-ador 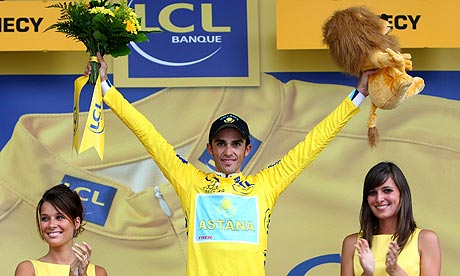 The Spanish Cycling Federation has cleared Alberto Contador of doping, reversing its proposal to ban him for one year for a positive test at the Tour de France.

Contador will retain his third Tour title and can participate in this year’s race, but the International Cycling Union and the World Anti-Doping Agency can appeal the decision to the Court of Arbitration for Sport.

He blamed the result on eating contaminated beef.

The ruling came three weeks after the Spanish federation recommended a reduced one-year suspension rather than the standard two-year penalty.

Contador’s team then pushed for him to be cleared and face no punishment.

“We received the case dossier and now Alberto can ride,” Ramos said.

“The UCI will now study the dossier. From our perspective there is nothing to appeal and we hope the decision is not appealed by the UCI.”

The UCI confirmed Contador is cleared to race pending any appeal rulings from CAS.

The UCI has one month to appeal the federation’s decision, while WADA has another 21 days after that. Any appeals process is expected to drag until at least June, with the Tour beginning on July 2.

Contador will race for his new Saxo Bank-Sunguard team at the Tour of the Algarve, a five-stage race through southern Portugal which begins this week.

Contador, who is the two-time defending champion, is expected to give his first remarks on the decision in a television interview before the race.

“If everything goes well, the rider will take the start, tomorrow, at the Tour of the Algarve,” Contador spokesman Jacinto Vidarte said.

After learning of the proposed one-year suspension nearly three weeks ago, Contador vowed to fight any ban, calling himself a victim of antiquated, flawed anti-doping regulations.

“It’s a question of honour, defending your pride and your innocence,” the 28-year-old Spaniard said at the time.

Contador presented further evidence based along UCI and WADA anti-doping rules that allow the “elimination” of a sanction if the athlete can demonstrate “no fault or negligence” on their part after a minute trace of clenbuterol was discovered in his test.

Contador says he ate meat contaminated with clenbuterol on a rest day during the tour in July.

His case highlights a growing concern that clenbuterol can be consumed unwittingly by eating meat from animals who were fed the drug, which helps burn fat and build muscle.

Contador – one of only five cyclists to win the Tour, Giro d’Italia and Spanish Vuelta – also won Tour titles in 2007 and 2009. He was unable to defend his first title in 2008 after his Astana team was banned for doping.