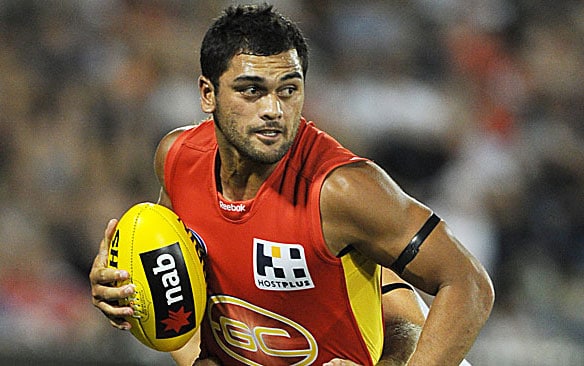 The Gold Coast Suns have played down speculation that Karmichael Hunt is set to quit the AFL to return to rugby league with former club the Brisbane Broncos.

Hunt’s contract with the Suns runs until the end of next season but the 27-year-old is reportedly on the verge of leaving for a reunion with the Broncos.

However, Gold Coast have no intention of letting Hunt go and expect him to see out the remaining year of his deal.

“Karmichael is contracted to the Gold Coast Suns for the 2014 season. At this point his pure focus, and that of the coaches, is on working really hard during pre-season to prepare himself for next year,” a club spokesperson told its official website.

“Karmichael had an injury-interrupted season in 2013 and we are excited about the role he can play for the team next year with a full pre-season under his belt.”

The statement added the club and Hunt have yet to discuss his long-term future and that those talks would “take place in due course”.

Hunt, who left Brisbane in 2009 to try his hand at rugby union with Biarritz in France, has featured 43 times for the Suns since joining the club two years ago.

Only nine of those appearances came in 2013 as hamstring tendonitis curtailed his season and he is set to battle it out with Gold Coast’s talented youngsters for a starting berth in 2014.

Fans who watch AFL live online know that Hunt’s departure would be a blow to the Suns, who were forced to sack Campbell Brown after the forward broke team-mate Steven May’s jaw on a night out.

Of all the AFL results he has contributed to, Hunt’s best moment as a Gold Coast player came when he booted a winning goal in the dying seconds to give his side victory over Richmond in Cairns in 2012, one of only six wins he has been involved in.