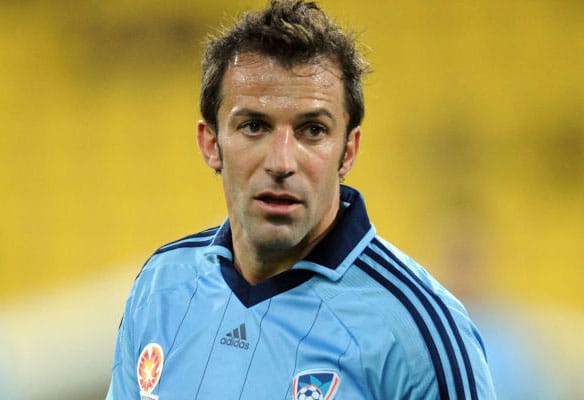 Sydney FC plan to hold talks with the former Italy international, Alessandro Del Piero, to see if the 39-year-old wants to carry on playing for the A-League side next season.

Del Piero has spent the last two seasons with the Sky Blues, joining the club in September 2012 as the highest-paid player in A-League history.

After spending almost two decades with Juventus, he scored 14 goals in his first season with Sydney – including four in a 7-1 hammering of Wellington Phoenix – but was unable to steer the Sky Blues into the end-of-season finals.

He was named captain at the start of this campaign but has been unable to replicate last term’s goalscoring heroics and has been linked in the betting news with a move to PTT Rayong, in the Thai Premier League.

Sydney chairman, Scott Barlow, said: “I’ve seen a couple of reports and I only know what I’ve read from those but Alessandro is contracted with us until the end of the season, not beyond.

“I’m due to sit down with Alessandro and begin a discussion about his future with him – as we always agreed we would – before the end of January.”

Fans betting on soccer know that Sydney coach, Frank Farina, may have a big rebuilding job to do if Del Piero does move on as his other marquee player, the former Blackburn Rovers star, Brett Emerton, recently announced his retirement from the game.

Barlow added: “We don’t have a lot of room left in the salary cap, but clearly with Emerton retiring that creates an opportunity. If Frank and his staff can find a player they think adds value for the rest of the season, we’ve told them we’ll fund it.”