Youth gets sentenced to 10 years of church 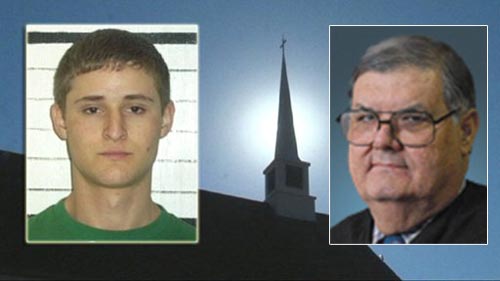 Tyler Alred, 17, pleaded guilty to first-degree manslaughter for the crash that led to his 16-year-old friend John Dunn’s death in December last year.

The conditions included 10 years of church attendance, finishing high school and completing a welding course. He also must take drug, alcohol and nicotine tests for a year, wear a drug and alcohol bracelet and be part of victim’s impact panels.

Alred’s barrister and the victim’s family agreed to the terms of the sentence, with Dunn’s sister telling the judge that there was no sense in ruining two lives by sending Alred to prison.

Judge Norman said that he had used the church requirement as a sentence condition before, especially in child support cases.

He had, however, never used it before for a manslaughter charge and believed his sentence would not pass a legal challenge. He said he believed neither side would appeal.

“Both families were satisfied with the decision,” Norman said in an interview.

“I talked to the district attorney before I passed sentence. I did what I felt like I needed to do.”.

“It’s my understanding that this judge has recommended church in previous sentences, and I believe that goes too far, as well,” said Kiesel. “This, however, actually making it a condition of a sentence, is a clear violation of the Establishment Clause and the Free Exercise Clause of the First Amendment.”

The sentence is supported by both parties and the church. Boulevard Christian Church Pastor James McCracken claims that the cross is, in his opinion, “the ultimate sign of hope”.

“I believe that being in a church situation puts you in an environment where you can hear things that will change your life,” he said.