Would you fancy living in ‘Hitler Towers’? 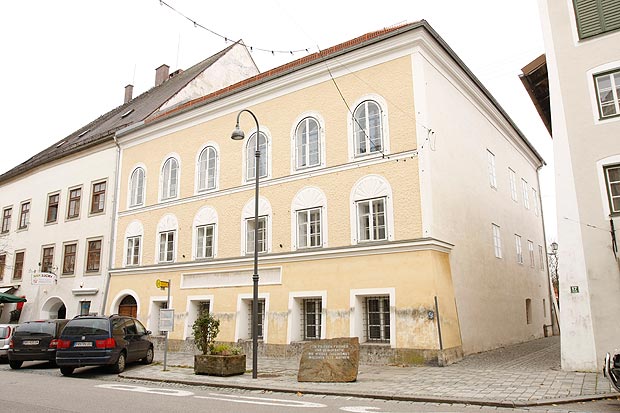 The house where Hitler was born could be turned into luxury apartments.

The building, in the town of Braunau, Austria, is the last place most people would choose to live.

The site even attracts sick neo-Nazis paying homage to the man responsible for the Second World War and the death of six million Jews.

The current owner of the building wants to sell…and sceptical locals have now dubbed the proposed scheme “Fuhrer Mansions” and “Hitler Towers”.

But the town’s mayor reckons converting the property into flats would help rebrand the area.

Johannes Waidbacher says: “It is not necessary to build a Holocaust museum in the house, as some have suggested.

“Braunau as a town is stigmatised enough even though Hitler spent only three years of his life here.

“Why should I or others take responsibility for him?”

The unremarkable block, which is currently empty, was originally a pub called Gasthof Zum Pommer.

Hitler’s mother Klara and father Alois rented rooms in the hostelry. After the Fuhrer was born in 1889 they lived there for three years.

Over the years it has served as a library, a school, a bank and resource centre for the disabled. What should be done with it is a difficult question for residents. Student Pruejscy, 31, says: “People should stop going on as if this place is cursed.

“Build some apartments, let them out cheaply and that would be good revenge on old Hitler.”

Pensioner Helmut Eichberger, 70, adds: “I am for apartments but only if they are affordable. We’re all ashamed Hitler was born here.”

Housewife Andrea Angel, 47, says: “A museum to the past, to the hell Hitler caused, is the only useful function. It would showcase, in the very place he was born, the terrible things he went on to do.” And Heribert Hillbrand, 65, says: “I envisage a place where people can talk in an educated manner about what Hitler meant, what his legacy was.

“I think the historic weight of this place rules out turning the building into apartments.”

The idea of turning the site into flats has riled Russian politician Frantz Klintsevich of President Vladimir Putin’s United Russia Party. Some 27million people from the former Soviet Union were killed during the war…more than any other country.

He has now launched a $3million bid to buy the site. Frantz said: “I want to buy it and blow it up. Erase it from the earth forever.

“It is a place of filth and infamy in which the devil himself was spawned.

“I am embarking on raising the money to buy it and when I have it, I will destroy it.”