Woman sits on the toilet for two years 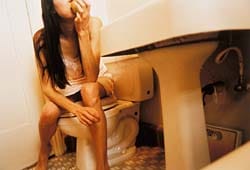 A woman in the US has supposedly been sitting on the toilet for nearly two years.

You may have read our article yesterday about a French woman that was trapped in her bathroom for three days, but this story beats that hands down.

Authorities in the US are trying to establish what caused a 35-year-old woman to sit on her boyfriend’s toilet for so long her skin grafted to the seat.

Kansas woman Pam Babcock had to be prized off the toilet at her boyfriend Kory McFarren’s house after allegedly sitting there for two years.

Ness County Sheriff Bryan Whipple told AP there was no indication Babcock had been restrained against her will.

McFarren told police he had asked Babcock every day to please come out of the bathroom, but her reply was always, “Maybe tomorrow.”

He also said he brought her food and water every day.

Police found Babcock clothed and sitting on the toilet with her pants lowered to mid-thigh level.

“We pried the toilet seat off with a pry bar and the seat went with her to the hospital,” Whipple said.

“The hospital removed it.”

Ontario’s City News website is reporting that McFarren may face charges in relation to the case.

Questions are being asked about why the 36-year-old antique store worker didn’t raise the alarm earlier.

But he insists the situation developed slowly and he had come to believe his girlfriend’s behaviour wasn’t strange.

“It just kind of happened one day; she went in and had been in there a little while, the next time it was a little longer. Then she got it in her head she was going to stay, like it was a safe place for her,” he said.

McFarren insisted Babcock hadn’t spent the entire two years on the toilet, claiming that until late January she was taking baths and changing her clothes regularly.

He says he panicked and finally called for help two weeks ago when Babcock appeared groggy after spending as much as a month sitting on the toilet.

McFarren says Babcock developed a phobia about leaving the bathroom which stemmed from beatings she received in her childhood.

But despite his professions that he was caring for his partner of 16 years, authorities have indicated they are considering charging him with mistreatment of a dependent adult.

Babcock’s legs atrophied (suffered muscle wastage) as a result of her sitting on the toilet for so long and it’s not known if she will ever walk again.