What a lot of balls 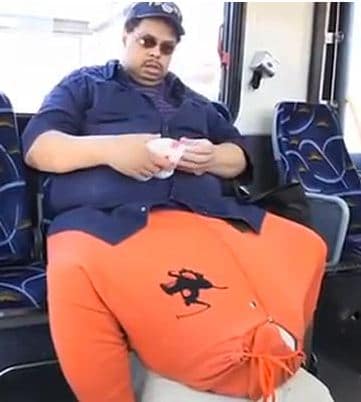 Wesley Warren Jr, 47, from Las Vegas, suffered a testicle trauma that left him with a scrotum weighing 100 pounds.

In a desperate bid to raise the $1 million necessary for an operation to remove it, Warren has gone public on his embarrassing plight.

Wanting a big pair is one thing but enduring the incapacitating effect of a 100 pound scrotum is another.

Following what he describes as a testicle trauma 47-year-old Wesley Warren Jr woke to find an enlarged scrotum the size of a soccer ball in 2008. Since then the scrotum has continued to grow at an alarming rate until today the massive deformity is positively freakish.

Doctors have diagnosed Warren’s condition as scrotal elephantiasis, more usually found in parts of tropical Asia or Africa where it is associated with a mosquito-spread parasitic infection.

However in Warren’s case the cause is more likely to be trauma resulting from his leg accidentally striking his testicles.

Warren is severely restricted as the huge growth impedes his movements. He has to physically lift the scrotum out of his way and the weight requires support.

Speaking to a reporter,Warren said “Hard to believe, isn’t it? It’s freakish. It’s not easy to get around. It makes me stay in most of the time.”

Despite the obviously painful and grotesque situation Warren finds himself in there has been no offer of an operation to rectify the condition. Instead the now unemployed Vegas man must stump up close to $1 million for an operation and necessary hospital stays.

Doctors originally told Warren that corrective surgery could leave him without his penis and testicles, but then doctors at UCLA told him they could save his penis but he would need to pay for the operation himself as Nevada Medicaid would not cover it.

In an effort to raise the money Warren decided to go public about his condition, choosing the Howard Stern show in the hopes that the large audience may contain some empathetic males.

Warren said “I don’t like being a freak, who would? But I figured that the Stern show is listened to by millions of people and they might want to help me. I hope some millionaire or billionaire will want to help me.”

Warren used the pseudonym “Jonathon from Las Vegas” to go public and appealed to the audience saying his penis is all but buried in the scrotal tissue and is of little use to him beyond dribbling.

Donations can be sent to him via his email, [email protected]