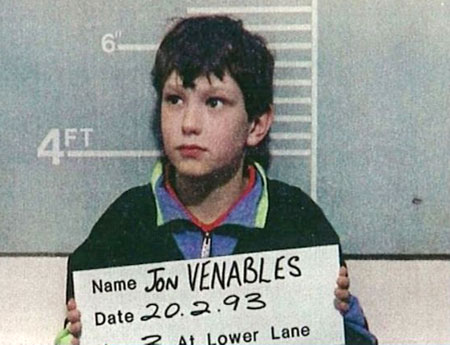 He gorged on chocolate, sweets and crisps…then whined that being fat left him feeling depressed.

This is chocolate, sweets and crisps that James Bulger never got to eat…so why the hell is this fucker being allowed to eat such treats. He will obviously never ever change. He does not deserve to live and breath the same air as the Bulger family…or anyone who has one decent bone in their body.

Concerned prison chiefs put him on a strict diet and paid for him to have personal training sessions for an hour a day, four times a week. But Venables, 28, became obsessed with getting fit…and now spends three hours a day in the prison gym on the running and rowing machines.

Well, the prison chiefs might well have been concerned…but I am very, very concerned. I’m so concerned that I too would pay for Venables…yes I would…to be hung by his vile neck until and watch him breath his last breath…and then dump him in the same place as Osama Bin Laden. All the horrible fuckers of the world should be dumped in the same way.

Yes it is extreme, but, as most of you may or may not know, I am not a right wing activist. I just want some justice in the world. Let’s face it, it would be lovely to forgive and forget and everyone can just get along in harmony. But sometimes…A WRONG DOING NEEDS TO BE RIGHTED.

A source said, “Due to his size he can only jog for about 15 minutes before he has to catch his breath…but he has lost a lot of weight.”

Venables health kick comes ahead of a fresh bid for freedom. He is due to face a parole board in the next few weeks, but sources say he is unlikely to be released.

I say let him be released…let him out so he can be hunted down and tortured.