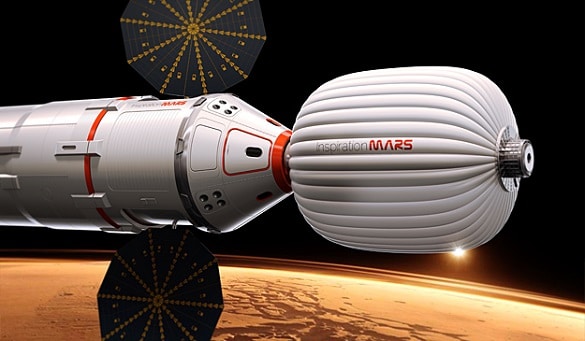 A nonprofit foundation wants to recruit a man and a woman – possibly a married couple – for a bare-bones, 501-day journey to Mars and back that would start in less than five years, project organizers have said.

The mission, expected to cost upwards of US$1 billion, would be privately financed by donations and sponsorships.

Project founder Dennis Tito, a multimillionaire who in 2001 paid US$20 million for a trip to the International Space Station, said he will pay start-up costs for two years to begin development of life-support systems and other critical technologies.

Currently, there are no U.S. human spaceships in operation, but several are under development and expected to be flying by 2017.

That leaves little time to take advantage of a rare planetary alignment that would allow a craft to loop around Mars, coming as close as about 240 kilometers to the planet’s surface, before returning to Earth.

The launch window for the mission opens on January 5, 2018.  The next opportunity is not until 2031.

“That’s the kind of bold thing we used to be able to do,” said MacCallum, who also oversees privately owned Paragon Space Development Corp.

“We’ve shirked away from risk.  I think just seriously contemplating this mission recalibrates what we believe is a risk worth taking for America,” he said.

The spacecraft will be bare-bones, with about 17 cubic meters of living space available for a two-person crew.  Mission planners would like to fly a man and a woman, preferably a married couple who would be compatible during a long period of isolation.

The capsule would be outfitted with a life-support system similar to the one NASA uses on the space station, which recycles air, water, urine and perspiration.

“This is going to be a very austere mission.  You don’t necessarily have to follow all of NASA’s guidelines for air quality and water quality.  This is going to be a Lewis and Clark trip to Mars,” MacCallum said, referring to the explorers who set out across the uncharted American Northwest in 1803.

If launch occurs on January 5, 2018, the capsule would reach Mars 228 days later, loop around its far side and slingshot back toward Earth.

The return trip takes 273 days and ends with an unprecedented 51,119-kph slam into Earth’s atmosphere.

Once the spaceship is on its way, there is no turning back.

“If something goes wrong, they’re not coming back,” MacCallum said.

The crew would spend much of their time maintaining their habitat, conducting science experiments and keeping in touch with people on Earth.

Tito said he expects the cost to be similar to a robotic mission to Mars.  NASA’s ongoing Curiosity rover mission cost US$2.5 billion.  A follow-on mission scheduled to launch in 2020 is expected to run US$1.5 billion.

“You’re really flying this mission without a propulsion system on the spacecraft.  It’s in the most simple form,” Tito said.

NASA is working on its own heavy-lift rocket and Orion space capsule that could carry crews of four to an asteroid and eventually to Mars.

“We can just barely, every 15 years, fly by Mars with the systems we have right now,” MacCallum said. “We’re trying to be a stepping-stone.”