Man cyberdates his mum for 6 months 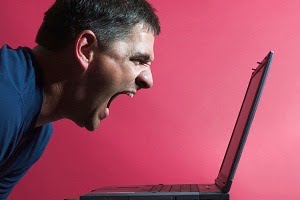 If you ever thought you were unlucky in love then spare a thought for poor Daniel Anceneaux from Marseilles France, who spent weeks chatting online with a sexy, kinky woman before finally arranging a romantic rendezvous — only to discover that the girl he had been chasing for the last six months was his own mother!

The whole sordid incident began when Daniel, an X-ray technician, began scouring the Internet for young ‘ladies’ to put a little lead back in his pencil.

Using The Prince of Pleasure as his online name, he soon began flirting with a sexy online babe going by the name of Sweet Juliette, (who in reality was actually his mother, Nicole, who lives six miles away). Neither one of them had any clue as to the other’s true identity.

“I walked out on that dark beach thinking I was going to hook up with the girl of my dreams. And there she was, wearing white shorts and a pink tank top, just like she’d said she would.

But the worst was yet to come. A passing patrolman noticed the pair and cited them for visiting a restricted beach after dark.

“Danny and I were so flustered, we blurted out the whole story to the cop,” recalled matronly mom Nicole, 52. “The policeman wrote a report, a local TV station got hold of it — and the next thing we knew, our picture and our story was all over the 6 o’clock news. “People started pointing and laughing at us on the street — and they haven’t stopped laughing since.”

“I never knew my son could be so kinky”, Mrs. Anceneaux later said. When asked to define ‘kinky’ she replied:

“Well he told me he wanted to dress like a nun and take a crap in my handbag. Does that count?”

What do you think?