Is the poo revenge tattoo one big steaming hoax? 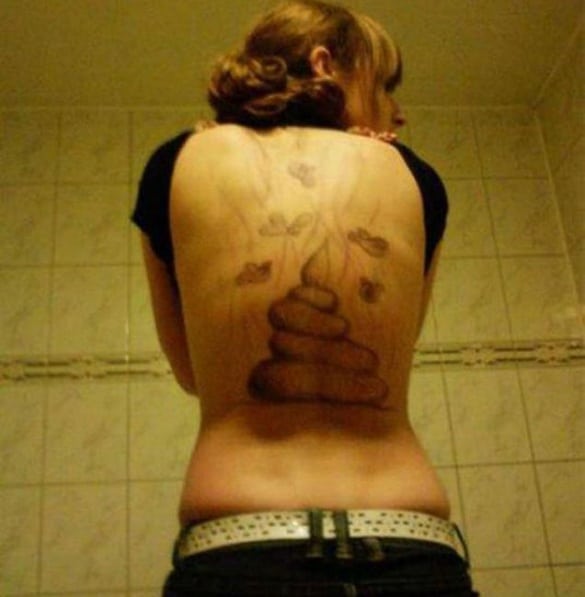 A seemingly perfect act of revenge in which an angry boyfriend tattooed a steaming pile of poo on his cheating girlfriend’s back has been thrown into doubt after the image went viral.

Rossie Brovent, from Dayton, Ohio, was said to be seeking $100,000 in damages after Ryan Fitzjerald ‘tricked’ her into getting the body art.

It was reported she was expecting a scene from the Narnia trilogy but her dream design backfired when Fitzjerald found out she’d been cheating on him with his best friend.

She was said to have claimed he tricked her by drinking ‘a bottle of cheap wine’ and downing tequila shots with her before she signed the consent form.

‘Actually I was passed out for most of the time, and woke up to this horrible image on my back,’ she was reported as saying.

Ms Brovent apparently tried to have him charged with assault – but there were no police or court records of the incident and no one of that name could be tracked down in Dayton.

It has now emerged that the picture of the tattoo appears to have been sourced from Polish social network site Nasza-klasa.

Earlier this year, 41-year-old Jacqui Moore celebrated her divorce by allowing her new lover to give her a ‘full bodysuit’ tattoo.

Only her left armpit, half her right leg and most of her face is uncovered – but she hopes to get that inked next spring.

‘I went to get a new tattoo to symbolise my freedom and the new chapter in my life,’ she explained.

‘When I got to the parlour I met Curly and we fell in love and he has been tattooing me ever since.’