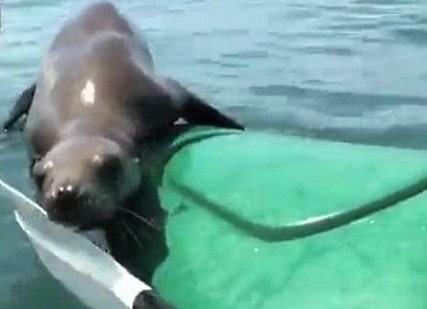 An angler’s peaceful fishing trip on the Pacific Ocean was rudely interrupted by an eager seal looking to get his flippers on the catch of the day.

The unidentified man appeared to be enjoying a day’s fishing with a group of friends aboard a set of kayaks when he received some unexpected company.

Seconds after teasing his friend about the lack of fish he had caught, the drifter got a dose of karma when a seal began attacking the side of his kayak.

Despite repeated cries of ‘What are you doing?’, the marine mammal took little notice of his pleas as it ducked and dived around the kayak.

Making its way to the nose of the kayak, the seal then leaped out of the water in an attempt to mount the water vehicle, much to the amusement of the fisherman’s friends.

The persistent mammal eventually made it aboard, after several splashes and failed landing attempts, where it made a beeline for the fish caught earlier in the day lying on deck.

Attempting to explain the unusual situation, the slightly rattled cameraman can be heard saying: ‘I think he’s blind.’

He later adds: ‘He’s starving. I think he wants my fish. He’s associating people with food and he wants my food.

‘Here we are out in the Pacific Ocean, catching fish and then along comes …’ before the intrusive seal jumps aboard again.

The fisherman eventually takes a shine to the seal and gives him a fish, which he gratefully devours while relaxing towards the front of the canoe.

It looks like he got what he wanted in the end.