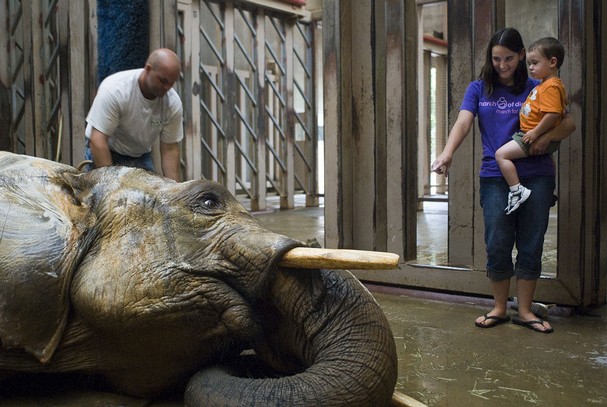 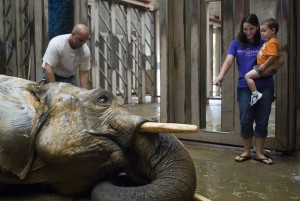 An inquiry is underway after an 8,000 pound elephant at a Tennessee zoo backed a trainer into a wall and crushed her to death yesterday.

Knoxville Zoo said today that it had temporarily closed its elephant exhibit, while the rest of the zoo remained open.

But a zoo spokesman insisted the death of 33-year-old Stephanie James was nothing more than a terrible and tragic accident.

Tina Rolen, assistant director of marketing at the zoo, said, ‘It’s a difficult day but our staff is very professional and they are carrying on with their duties today.’

She said the review of yesterday’s tragedy was continuing.

Ms James was fatally injured while performing routine chores involving Edie, a 26-year-old, 8,000 pound elephant which is eight and a half feet tall at the shoulder.

Edie is one of three African elephants at the zoo.

Ms Rolen said, ‘At this point in time we don’t believe it to be a malicious act or an aggressive act on Edie’s part, but the review is ongoing to determine what happened in the barn.

Ms Rolen added that Ms James, one of four full time elephant trainers at the zoo, was apparently pushed into the wall in a stall by the animal.

She was taken to nearby University of Tennessee Medical Center, where she died of internal injuries.

Jim Vlna, executive director of the zoo, said, ‘Everyone at Knoxville Zoo is shocked and saddened at the loss of Stephanie. Our prayers are with her parents, Ron and Kris James, and the rest of her family.’

Ms Rolen said Edie would not be punished or disciplined in any way.

She added, ‘Our training programme is based on positive reinforcement.’

In an interview, Stephanie James’s father Ron said he said he last spoke to his daughter over Christmas, and that the news of her death was devastating.

He said, ‘It was just a shock when they called. I’m so surprised that anything happened, because she was so concerned with safety. That was her first priority.’

Miss James was the youngest of three girls.

Mr James, who lives with his wife in New Palestine, Indianapolis, said: ‘We had pets when she was growing up, she just loved any kind of animal.

‘When she was in high school, she’d clean out the stalls just so she could work with horses.

Miss James went to college at Purdue University, graduating with a degree in animal science.

Mr James said, ‘She got a job at Sea World and worked there for seven or eight years, in all the different departments with the dolphins and the sea lions.’

Mr James revealed that his daughter was also taken to hospital while working at Sea World, after a dolphin knocked her into a pole.

He said she eventually wanted to move on to land animals and got a job at the Knoxville Zoo. In 2009, she started working with elephants in the Zoo’s exhibit.

Mr James said, ‘The elephants, they are always looking for enrichment and she really had fun thinking of new ways to make their life more fun.’