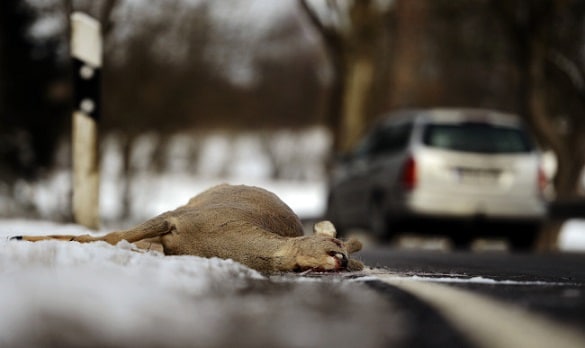 The US state of Montana has passed a law allowing residents to eat animals they kill with their vehicles.

The bill, which was passed by 19 votes to 2, allows deer, elk, moose and antelope that have been killed by cars to be legally eaten.

It had initially included other animals such as sheep and bears but they were dropped from the bill to avoid drivers looking for financial incentives in deliberately killing them.

Speaking to Fox News, state representative Steve Lavin, who is also a state trooper, said he introduced the bill because he thought people were missing out on potential food.

‘As people know, people hit a lot of animals on roadways, and I mean a ton of them. There’s a lot of good meat being wasted out there,’ Mr Lavin said.

He also told New York Daily News why he had excluded some animals from the new law.

‘We have some animals whose parts are worth quite a bit: sheep, bobcats and bears. So I reduced the bill down to deer, elk, moose and antelope,’ he said.

‘The bill is confined to those four animals for that purpose. Their parts aren’t worth what sheep or bear parts are worth.’

In 2011 over 1,900 accidents involving wild animals were reported in Montana, with almost 7,000 carcasses collected from the side of roads.