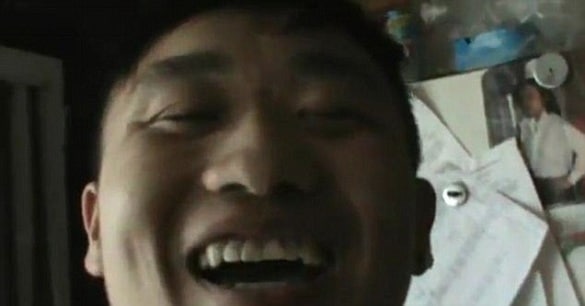 A victim decided to get his revenge on a cocky criminal who boasted about his crime on the video camera he stole by uploading the recording onto the internet.

Smiling criminal Houaka Yang, from La Crosse, Wisconsin, made over 20 recordings on the video equipment he stole from the car of Republican state Senate candidate Bill Feehan.

Despite claiming on the clip that he would never be caught, police arrested the 20-year-old just days later after he was spotted breaking into the car on CCTV.

Feehan was borrowing the camera from his colleague Chris Rochester when the opportunist struck.

And once his property had been returned Rochester decided to get his own back by uploading it onto YouTube.

Police didn’t have to try too hard to compile a case against the criminal however, after Yang revealed where he lived, his name and face on camera.

‘This is my house and a stolen camera that I stole,’ he says before taking viewers on a guided tour of his home. ‘But it’s OK, the cops won’t figure it out.’

He later adds: ‘Oh yeah, to introduce you, my name is Houaka Yang, so yeah. How do you do?’ before turning the camera back on himself to look down the lens.

The video, entitled ‘Confessions of a stupid criminal: Thief is sure he won’t get caught’ has been watched over 10,000 times on video-sharing website YouTube.

Rochester added the attached caption: ‘Does this guy qualify as a stupid criminal? You be the judge.’

One amused user wrote: ‘Oh, nooooo. The cops will never figure THAT out! What an absolute idiot.’