Donna Simpson wants to be the fattest woman in the world 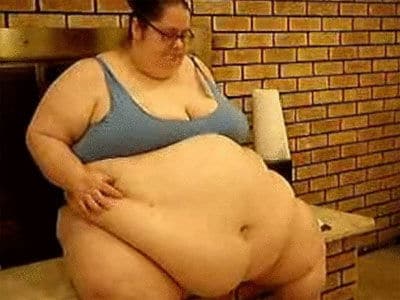 In her quest to become the world’s fattest woman, Donna Simpson is already profiting from her challenge – by earning $90,000 a year from fans who pay to watch her eat online.

The American mother-of-two, who already holds the dubious honour of being the world’s fattest woman to give birth, makes money from people hungry to watch her eat more than 15,000 calories a day.

Single Donna, 44, weighs 317.50 kilos, but is determined to pile on yet more weight so she can reach her dream goal of being 457 kilos and crowned the world’s fattest woman.

The profits from her website, where people are charged around $20 for 30 days viewing, means she can now afford to fund her huge food shopping bill, which is estimated to cost her around $800 a week.

The New Jersey mother ploughs through burgers, chips, meatloaf, pizza, cake and fizzy drinks – and all while people watch her and browse photographs of her tucking in to her huge meals.

But Donna, who struggles to walk and suffers high blood pressure, heart disease and diabetes, refuses to give up her incredibly dangerous eating habits, ignoring all doctors’ warnings.

The 5ft 2in mother, who now requires a mobility scooter to go shopping, wears XXXXXXXL dresses and tries to move as little as possible to prevent her from burning any precious calories.

Then, while sitting on her reinforced metal chair, she treated herself to a decadent dessert and ate a ‘salad’ made of marshmallow, cream cheese, whipped cream and cookies.

Donna is no stranger to online attention though – she met her long-term partner and feeder Philippe Gouamba on a dating site for plus-size people.

But after splitting from Philippe, the mother now relies on her four year-old daughter Jacqueline to bring her food to help her reach her twisted goal.

But Donna, who gave birth to her Jacqueline in 2007 by caesarean section with 30 doctors in attendance, is now trying to find a new feeder to ease the pressure off her young child.