Bear gets in a bit of a Jam-Jar 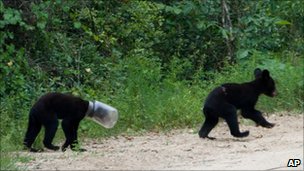 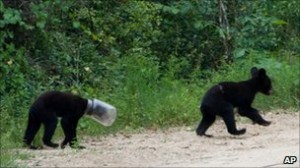 A bear cub in Florida, which had a plastic jar stuck on its head for at least 10 days, has now been freed.

The cub, affectionately nicknamed “Jarhead”, got its head stuck in the container while rooting through rubbish around the town of Weirsdale.

The cub was days away from death as he had not been able to eat or drink, biologists who rescued the bear said.

They sedated the mother bear before grabbing the cub, pinning his ears back and prising off the container.

Residents began calling the Florida Fish and Wildlife Conservation Commission (FWC) at the end of July to report sightings of the bear cub with his head stuck in a jar.

The cub, his mother and two siblings regularly foraged in the bins around Weirsdale.

After eight days of sightings, two days went by without any reports of the bear family, and the scientists feared the cub could have starved to death.

But on Friday, the bears returned.

The FWC team, including a specialist bear-response agent, went to the scene.

They shot the mother with a tranquiliser dart before wrestling Jarhead to the ground long enough to get the plastic container off his head.

“But the tough little bear lived up to its US Marine moniker and did not give up without a fight,” the FWC said on its website.

The scientists then placed the sleeping mother in a trap, where the three cubs eventually joined her.

After a day under observation in the trap, the bear family were released and have not been seen since – a result the FWC describes as “good news indeed”.

“Although the story appears to have a happy ending, it truly illustrates one of the worst things that can happen when wildlife gets into garbage,” the FWC said.