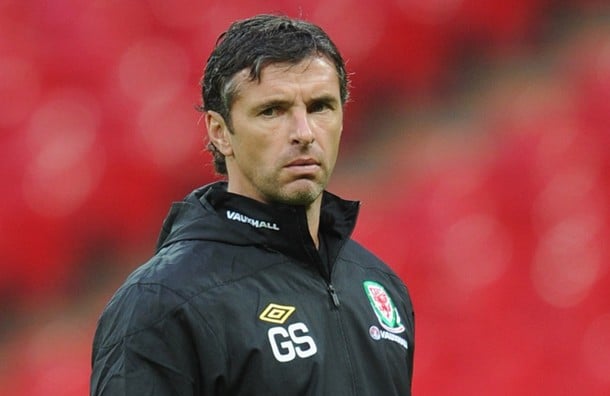 The world of football was in shock today after Wales manager Gary Speed was found hanged at his home in Cheshire.

Police say there are no suspicious circumstances surrounding his death, which is thought to be suicide. He leaves his wife Louise and two sons.

As news of the tragedy struck, tribute flooded in for the Wales boss who only retired from playing last year after winning 85 caps for his country and scoring seven goals. 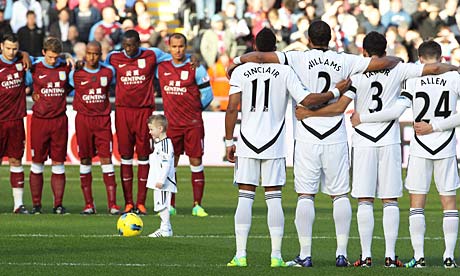 A hastily-arranged minute’s silence was then held at Swansea City’s match against Aston Villa at the Liberty Stadium after
the news broke today.

Former teammate Shay Given, now Villa’s goalkeeper, was seen in floods of tears before the match. The Football Association of Wales today confirmed that their manager had died.

In a statement, the FAW said: ‘The Football Association of Wales are sad to announce the death of the national team manager Gary Speed.

‘We extend our sympathies and condolences to the family. We ask that everyone respects the family’s privacy at this very sad
time.’

‘Officers went to the scene where a 42-year-old man was found dead. The next of kin have been informed and have confirmed the identity of the man as Gary Speed.

‘There are no suspicious circumstances surrounding the death and the family have requested that they are left to grieve in peace.

‘The death will now be a matter for the coroner.’

Within minutes, thousands of messages of condolence had been left on Twitter.

Ex-Wales boss Mark Hughes said: ‘I’m devastated. He was a privilege to work alongside and call a friend. My thoughts are with his family.’ 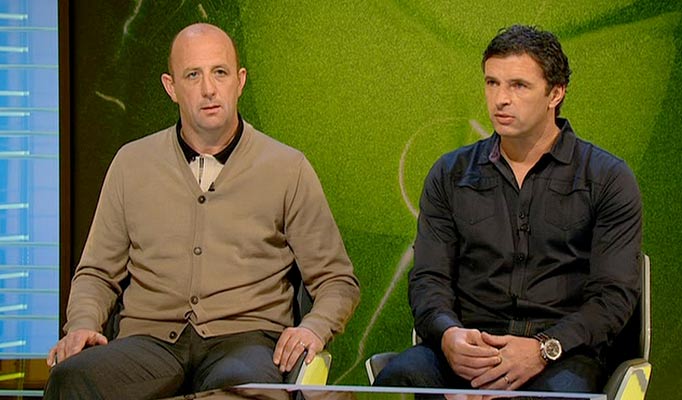 Bobby Gould, who made Mr Speed Wales captain, added: ‘I’m stunned and a few tears have been shed. It is so sad.

‘He was a great pro. He would play anywhere for you – left back, left wing, centre of midfield, wide left. It’s such a tragedy.

‘People are just stunned. I saw John Hartson earlier and I said “have you heard about Gary?”. The big man just cried and cried. We cuddled each other.

‘He’s gone home (from the Liberty Stadium). That is his respect towards Gary to say ‘I can’t work this afternoon’. Speedo was his pal. They were buddies.

‘Gary was the ultimate professional.’

Mr Speed was a guest on the BBC’s Football Focus show on Saturday with host Dan Walker.

‘Was with him for most of yesterday. I genuinely cannot believe it. Thoughts with his family.’

Mr Speed – who was with Gary McAllister on the show – told Walker that there was nothing like playing football.

Speaking on BBC News today, former Wales teammate Robbie Savage said: ‘I just can’t believe it. He was my mate and he’s
gone.

‘I’ve got very close to Gary in the last few years – the guy is a trooper, he’s left two gorgeous kids behind and a beautiful wife. He had everything, he had everything.

‘I spoke to him yesterday and we were laughing and joking – he was saying make sure you don’t get a two off Craig (Revel Horwood, the Strictly Come Dancing judge) tonight, you know. That’s what Gary’s like – he always thinks about other people.

‘As my captain when I was a young boy in the squad, he’d come to me and I could go to him with my problems.’

Welsh international footballer Simon Church wrote: ‘I can’t believe it. What a great man and a true welsh footballing legend a great inspiration to all.’

‘We looked forward to Wales camps because he led by example from the front, making people work harder, demanding more and

everyone wanted to do their best because he was a generous person.

‘I know I speak for everyone when I say everyone in the Welsh camp is devastated.’

Doncaster manager Dean Saunders, a former international team-mate of Mr Speed, told BBC Five Live: ‘He was so fit – he was one of those players who would stay behind all day in training. I can’t believe what’s happened.’

Asked if the Swansea game against Aston Villa should have been postponed, Saunders added: ‘I just feel for his wife and his dad, I feel sorry for them more than the football.’ 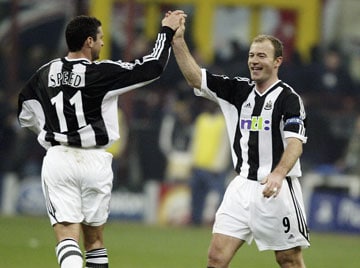 Alan Shearer played alongside Mr Speed at Newcastle for six years between 1998 and 2004, formed a close friendship with the Welshman.

He said: ‘Gary was a magnificent person, bright, fun and a wonderful family man – he lit up every room he walked into. I am proud to have been his friend and will miss him dreadfully.’

Newcastle defender Steven Taylor, who came into the first team at St James’s Park when Mr Speed was the side’s senior professional, expressed his gratitude for the help the midfielder gave him at the club.

‘It is a sad, sad day. I played with him when I came through the ranks,’ Mr Taylor told Radio Five Live. ‘He helped me through, he was an absolute machine – the best professional in football.

‘He had that aura about him. He always had time for the young lads and helped them feel good about themselves.’

Scottish Football Association chief executive Stewart Regan was left shocked by the news as he had met Speed just days ago.

He said: ‘I am speechless at the news of Gary Speed’s death. Craig Levein (Scotland boss) and I had lunch with him on Wednesday in Brussels. He was a talented young manager. So sad.’

Former Leeds manager Howard Wilkinson described Mr Speed’s death as a ‘tragic loss’ and said the former Wales midfielder was a ‘star in the true sense’.

But he said Mr Speed had been ‘subject to all the stress and strains and the good things that happen to one in life.’

‘The players I worked with represented all colours of the rainbow in terms of character but in Gary’s case he was a star in
the true sense,’ he said.

Hailing Mr Speed’s ability on the pitch, he added: ‘It’s unbelievable, I’m still struggling to get my head around it. I’ve known Gary since 1988 when I joined Leeds and I’ve rarely come across a better balanced, lovely, genuine person.

He began his professional career with Leeds United making his debut at the age of 19, alongside Gordon Strachan, Gary McAllister and David Batty.

He then went to Bolton Wanderers in 2004 where in 2006 he became the first player in history to make 500 appearances in the Premiership.

He moved to Sheffield United making his debut on New Years Day 2008 but a back injury that November forced him to retire as a player.

During his international career he played in the Wales side of Ian Rush, Mark Hughes, Neville Southall and Dean Saunders.

He captained Wales until hid retirement from international football in 2004. He has been capped for Wales 85 times making him the
most capped outfield player.

Appointed an MBE in the 2010 Birthday Honours.