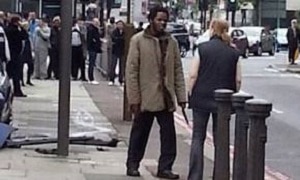 A young man butchered in a London street and the two men who confront the police are shot.

Dozens of bystanders look on, but are too afraid to tackle mad men with knives and choppers. The men claim people in their country are being butchered and they are claiming an eye for an eye. Yet both have South London accents and probably have never left the UK. Will there be a backlash against innocent Muslims? – Almost certainly.

Can we learn anything from this dreadful bloodbath?

This year here in Australia, we have already had more and more shootings and murders than ever before. Are we learning anything from the deaths, or like the UK, is it going to get worse?

Cyclone in Oklahoma and many dead – This is the second time the town has been devastated by a cyclone. The USA is a very rich country and they can fight wars in many foreign countries. Why can’t they use their technology to invest in safe storm-shelters, and houses not built of wood, but bricks.

Same sex marriages and adoptions are spreading around the world with the UK and France agreeing to change the laws.

Here, Kevin Rudd has an about turn and now we assume he is for same sex marriage and adoptions. In Australia, are we sheep following the flock? When will Australia’s religious leaders speak out…are they afraid? I assume it is still forbidden by Christians and Muslims, yet homosexuals say 60% of Australians are for a change in the laws. Is there a difference between for…against …and couldn’t care less? Probably the 60% includes ‘couldn’t care less’. Maybe the elections will show how pollies really feel about the vote for or against. Will it affect how you will vote for a pollie who admits his preference?

Russia gives weapons to Syria and says they are not contravening any laws. Tell that to the thousands of dead including so many children.

Rolf Harris is still under investigation over abuse by UK police, and out of the woodwork come persons employed by Michael Jackson with alleged stories of abuse with children. Where were they when the court case was being examined? It is sometimes a terrible curse to be too rich.

This week has been a week of death and horror. What is wrong with the world today?
Let us hope next week will be a time of peace.