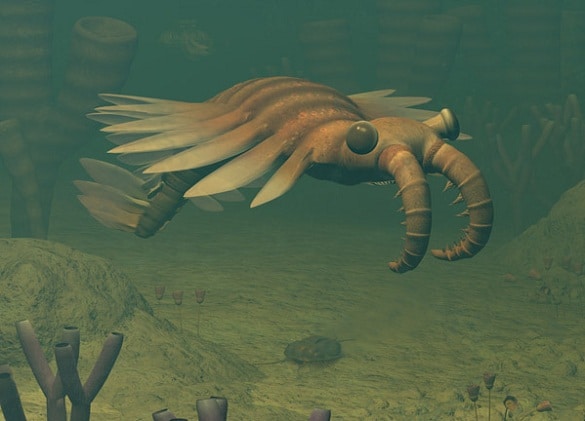 Australian scientists have hailed the discovery of a pair of insect-like eyes belonging to a freakish prehistoric super-predator which trawled the seas more than 500 million years ago.

Measuring three centimetres (1.2 inches) across and with a whopping 16,000 individual lenses the fossilised eyes, from a huge shellfish-type creature called anomalocaris, were found in rocks on Australia’s Kangaroo Island.

Anomalocaris could grow up to one metre long and were considered the “great white shark” of the Cambrian era, topping the ancient marine food chain, according to lead researcher John Paterson.

Paterson said the discovery showed that anomalocaris had lived in well-lit, clear waters and had developed sophisticated vision extremely rapidly, likely triggering an evolutionary “arms race” among other creatures.

Spines, poison glands and other defence mechanisms had probably erupted among creatures eager to escape detection by its huge eyes, which protruded from the side of its head on stalks.

“When you look at the animal itself it’s quite an alien-looking beast,” said Paterson, from Australia’s University of New England.

Aside from its protuberant eyes, anomalocaris had formidable claws lined with spines which it used to catch its prey and a “gnarly-looking circular mouth with teeth-like serrations inside”.

“Those serrations were either used for shredding or chomping up its prey, so it was a pretty nasty-looking creature,” Paterson said.

The fact that anomalocaris had been found to have compound eyes also confirmed it was an ancestor of modern arthopods, which include insects and shellfish, said Paterson, whose study was published in Nature.

When the specimen was originally trapped in seafloor mud about 500 million years ago Australia, then part of the Gondwana supercontinent, was in tropical waters straddling the equator, Paterson said.

The fossil had been pushed from the sea floor at about the same speed human fingernails grow and eventually ended up on Kangaroo Island — now a hotbed of Cambrian artefacts — off Adelaide in South Australia.

Paterson said the site was riddled with “a variety of fairly enigmatic” specimens that remained a mystery to science and were difficult to classify because they were from a very early period in animal evolution.

“The body plans of animals that we’re familiar with today were still kind of being tinkered with in the Cambrian,” he said.

“Sometimes they have features that are completely foreign to what you would see in a modern organism.”

Though anomalocaris specimens had been found before in Canada and China, Kangaroo Island was the first place an intact eye had been discovered, due to the unique shale rock it was trapped in, which had once been “zero oxygen” mud.

“Within the mud or within the sediment there’s essentially no oxygen to allow for microbes to start to break down soft tissues,” Paterson said.

“What we’ve seen in the Emu Bay shale at Kangaroo Island is a much better picture of what was living there at the time than you would otherwise get in a conventional fossil deposit.”