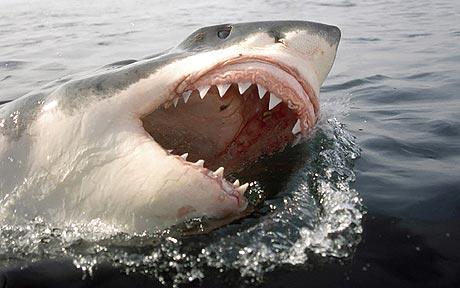 The Gracetown shark attack that killed 31-year-old surfer Nicholas Edwards this morning was so swift that no-one saw the incident, police have said. “No-one saw a fin, a shark or any thrashing. He was sitting on the board and then the board is on its own and he is in the water,” Sergeant Craig Anderson said today. But witnesses earlier today said the massive size of the shark meant there was no doubt it was a white pointer. 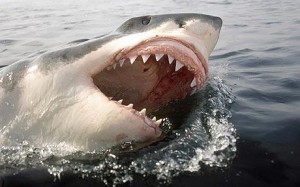 Mr Edwards lived in Busselton but was originally from the Eastern States. He was married with two children, aged seven and two. Sgt Anderson said the man was face down and unconscious when he was pulled from the water. The beach has been closed for 15km until tomorrow. Local sea, search and rescue and Fisheries Department vessels patrolled the area but have ended the search because of bad weather. A Fisheries Department vessel from Busselton turned back when it reached Cape Naturaliste this afternoon. Fisheries regional manager Tony Cappelluti said it was possible the search vessel would go to the bay where the man was killed tomorrow if the weather improved. However he said it was likely that the shark had already left South Point. “Sharks are very mobile. It might be some kilometres away already,” he said. Mr Cappelluti said they had the authority to destroy a protected shark species, such as a Great White, but would only do so if there was an immediate threat to people. Fisheries scientist Brett Malony said the attack seemed to be random. “There’s no real knowledge why an individual will or won’t attack at a point in time,” he said. Great White sharks had no particular migration or attack pattern and there were many different species of sharks in that area. Pictures from the scene Surfers and other onlookers who tried frantically to save the man’s life had done an extraordinary job, Sgt Anderson said. Gracetown surfer Rob Alder raised the alarm after he saw the surfer at South Point this morning, then looked back using his binoculars and noticed the board had been snapped in half. “I was watching through binoculars from my verandah deciding whether to surf at North Point or South Point. I got in my wetsuit and did a last check to confirm South Point, noticed there was no surfer with the board (that I’d seen earlier). “The board looked like it had been snapped in half. I thought maybe he’d taken a big one, so I called the shop and jumped on my bike as fast as I could and got down the to water front.” When Mr Alder arrived he found his friend Craig had already paddled out to retrieve the injured surfer from rocks. Mr Alder and Craig both then worked to get the injured surfer out of the surf and started trying to resuscitate him but he had no pulse.

“He’d lost a lot of blood, the injuries were on the right leg and the wound was severe. It looked like a wide bite at the top of the thigh.”

The men used a leg rope from their surfboard as a tourniquet to try and stem the flow of blood. 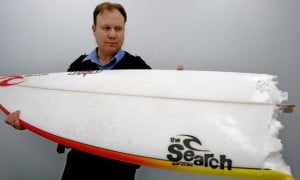 Sgt Anderson said St John Ambulance paramedics had worked on the man to try to keep him alive during the trip to Margaret River Hospital but he was declared dead when he arrived.

He said the victim was a miner who worked in Leinster and was due to return to work tomorrow.

“He was trying to get in one last surf before he went back to work,” he said.

The man had quite severe injuries, with a lot of damage to his right leg, upper thigh and lower calf.

He said the attack happened about 300m off South Point.

“The young couple that were first on scene did an outstanding job to wade into water and pull him in to shore and perform resuscitation until other surfers from top carpark came to assist,” Sgt Anderson said.

“St Johns tried full CPR right through to Margaret River Hospital. The efforts of those guys and St Johns and people assisting, carrying him up the cliff face, they did an outstanding job today of trying to save his life.

“The response by emergency services and the local community was almost instant but his injuries were severe.

“Judging by the injuries I would have thought he died in a matter of minutes.”

“It was beautiful out there this morning, you can understand why he was out there obviously trying to get the last surf in before he went back,” Sgt Anderson said.

“Seeing the community out and about this morning, they are taken aback. People involved in the rescue are offering support to one another. They are a fantastic community, very tight knit. They have tragedy in their history, I’m sure they will pull together.”

He said the police chaplain was providing support for the family.

Fellow surfer Eddie Kilgallon was in the water shortly after the attack.

“I was surfing out at Huzzawuiee, which is the middle break out here.I heard what I thought was whistling and I looked over on the point and saw a bloke stuck on the rocks.

“Then I saw a bloke running along the cliff top yelling ‘shark, shark’.

A local woman whose husband witnessed the attack said the feeling of dread rippled quickly through the community.

“We’re all pretty shaken, my husband was out there when Brad (Brad Smith killed by a shark in 2004) was taken so it’s just horrible,” she said. “You don’t expect it, not twice, not in such a small community.”

“His limbs were just massacred – they tried to help him but he just kept crashing.

“(The shark) looked huge, going by the size and the extent of the injuries they think it was a white pointer.”

Her husband said he was still very shaken.

“I was in the carpark just checking out the surf and I saw a lot of whitewater where there was no wave breaking, there was backwash flying everywhere, he could never have seen it coming” he said.

“I could see a piece of his board floating on the wave and another bloke running down to the shore so I called an ambulance.

“It’s had quite an effect, once you’ve seen a shark attack, and seen what it does you never want to go through that again.”

he Department of Fisheries said they would attempt to determine if the shark still poses a risk.

“If it posed a continuing risk, if it was determined that it was likely to keep hanging around and become a threat then that would be the decision,” he said.

The Bay Store manager Rachel Adams, a Gracetown resident, said there was still a lot of shock and confusion in the area.

“It’s a young man, that’s all they can tell at the moment, both his legs have been bitten,” she said. “The place is just very sombre, you don’t expect these kind of things.”

Ms Adams said the alarm was raised by a local man who was watching the surfers through a telescope on his balcony.

“He was watching them surf and then the guy went under but only the board came up,” she said.

Surfers who were there at the time haven’t been put off of going surfing tomorrow. One of the surfers said that surfing was a way of life. Although he also mentioned that they would all be going out together, because they would feel safer in numbers.

This is a terrible tragedy, and to leave a family behind is just dreadful.

In June this year a surfer survived a shark attack off the State’s south coast, fending off two charges by the predator at Conspicuous Cliff beach near Walpole.

There have been several fatal shark attacks in WA in recent years: Brian Guest at Port Kennedy in 2008, deckhand Geoffrey Brazier off the Abrolhos in March 2005, surfer Brad Smith off Gracetown in July 2004 and swimmer Ken Crew off Cottesloe in November 2000. All were said to have been Great Whites.