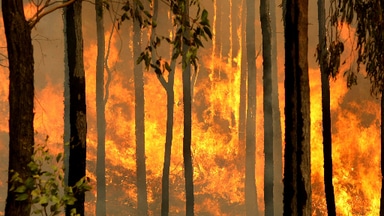 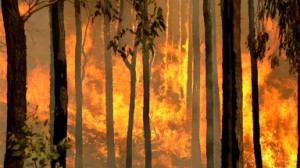 The two blazes have destroyed 4,000 acres of forested land to the north and southeast of Perth since Saturday.

In Roleystone and the nearby community of Kelmscott, 68 houses were destroyed and many more have been damaged.

Two hundred firefighters battled desperately to control the flames but they were unable to save the houses, the authority’s chief operations officer, Craig Hynes, said.

He feared that the tally of destroyed houses could rise as a survey of the Perth Hills area continued.

A firefighter who was injured fighting that blaze, which erupted shortly before noon on Sunday, was in stable condition at a hospital, Hynes said.

The devastating fires come after weeks of extreme weather conditions that have paralysed parts of Autstralia.

But the fires have not yet claimed any lives. The authority has not released details of how a female firefighter was hurt as she tackled the flames.

‘The pleasing thing is that there’s been no serious injuries or fatalities,’ he said.

Residents who were evacuated from the path of the blaze on Sunday only just been allowed back to their homes. Some will have a home to go back to…others will not.

I managed to get into the Clifton Hills area on Sunday evening. The whole of 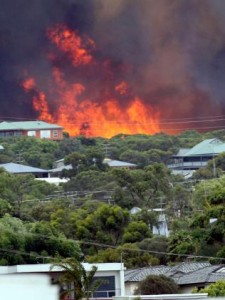 the hills were alight, and it was so windy. You could actually see the wind blowing the fire down the hill…there were spot fires everywhere.

I ran further up the hill with one resident, who’d decided to stay, and we saw, what I can only describe as, a fire-bomb come over and land on a house. There was this massive explosion with the impact of the fire being thrown by the wind. The house went up in seconds. Luckily no one was at hone.

We all tried to save the house but didn’t have a chance. We were then more concerned on making sure the fire didn’t spread to the houses around it. We managed to contain the fire which was great, but the resident with whom I’d ran up the hill with, had his house on fire now. On returning to his house, the same thing was going on. The wonderful neighbours were out there trying to put it out. He lost his house, but the community spirit is amazing. It really gives you a bit of faith in man-kind…well, at least in Australians.

At the local IGA, they were putting on free food, and there was a burger van giving free food to folk that needed it.

There were a few “undesirables” trying to get a free feed, even though they weren’t even from the Clifton Hills area. There’s always a few that spoil it, and this Natural disaster is no exception.

The cost of the latest disaster could cost tens of millions of dollars to repair the damage and rebuild homes once the flames have subsided.

Further north, in the Swan Valley district, some 150 firefighters using water-bombing helicopters and trucks had contained another fire by early Monday. There was no property lost there.

‘Conditions are still windy, but nowhere near as bad as yesterday,’ said spokesman Alan Gale.

About 100 people were told to evacuate their homes as authorities tried to contain that blaze, which started Saturday night and had scorched about 3,000 acres of forest land by Monday.

The Roleystone fire was accidentally started by an off-duty policeman was using an electric grinder in his backyard ignited dry grass with sparks, the Fire and Emergency Services Authority said in a statement.

He must be feeling awful right now. 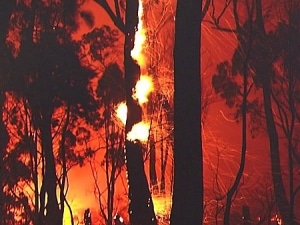 But I eventually evacuated the area and I managed to get back very early in the morning. And I heard on a local radio station that in two separate parts of the Clifton Hills area, there were two men who were using electric angle-grinders. Are these people really that stupid?

I have heard many wonderful stories of people helping each other and everyone mucking in to offer help to those who need it.

The other fire began when a tree branch that was blown down by strong winds hit electrical transmission infrastructure.

Firefighters are close to stopping the spread of the first wildfire and another that broke out over the weekend in the same area of Western Australia state.

The fires in Australia’s far west come as huge areas of the east coast recover from a major cyclone that struck in Queensland state last week and from flooding from drenching rains in Queensland and southern Victoria state.

February also marks the height of both the monsoon season in the tropical north and the riskiest period for wildfires.