McDonald’s are bringing back McFibs 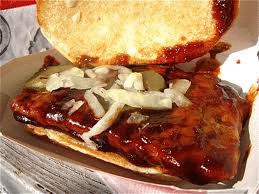 Do you really want to eat at McDonald’s?

McRibs are coming back on McDonald’s menus…and, for a limited time only, the pork and barbecue sauce sandwich promises ‘sweet, saucy temptation’ and a ‘fantastically flavourful’ ‘dream’ of a meal.

But the dreams end there, according to the Humane Society of the U.S., which has condemned the global fast food giant for selling pork that is reared in unethical conditions.

Reacting to what they say is the inhumane treatment of pigs, the HSUS this week filed a legal complaint against Smithfield Foods, McDonald’s main pork supplier, for making ‘unlawfully false or misleading representations about animal welfare and environmental practices.’

The complaint centres on a new series of videos made by Smithfield Foods, which claim that pigs are kept in ‘ideal living conditions’ and that their ‘every need is met.’ HSUS’s senior director of farm animal protection, Paul Shapiro, said that ‘primarily, Smithfield Foods is abusing animals and lying to their shareholders and the public about the abuse.’

In reality, claim HSUS, the picture is far more grim than the promotional videos would have many believe.

As part of their breeding programme, Smithfield Foods keeps 500-pound sows in ‘gestation crates’ that are roughly the same volume as their body. The cages are so small that the animals are unable to turn around for months, leading to muscle atrophy.

So inhumane are gestation crates, that eight states in the U.S. have passed laws requiring their phase outs from within two to six years, says Mr Shapiro.

The squalid crates are just one element of an alleged bleak scene at Smithfield Foods, based in Virginia.

The Atlantic cites a 2010 undercover HSUS investigation that revealed pigs to be living in ‘hellish conditions.’

It found crates covered in blood and crammed with female pigs, unable to move their muscles for much of their lives. It saw piglets falling through slats into manure pits and pigs being thrown into dumpsters while still alive. ‘The investigator saw many lame pigs but never a vet’.

It’s all a far cry from the claims that Smithfield Foods make publicly. 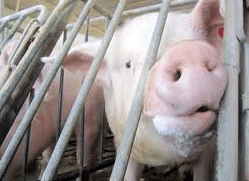 ‘We are proud of our unparalleled track record as a sustainable food producer and stand confidently behind our company’s public statements concerning animal care and environmental stewardship,’ said the company in a statement, denying HSUS’s allegations.

‘Any objective assessment of our practices would conclude that Smithfield and our employees are behaving in a socially responsible manner,’ it went on.

By way of comment, McDonald’s…who went so far as recently honouring Smithfield Foods with a ‘supplier sustainability’ award– released a statement from Susan Forsell, Vice President of Quality Systems McDonald’s USA, detailing its requirement of humane treatment of animals by suppliers.

‘McDonald’s has been a long-time supporter of alternatives to gestation stalls, and we will continue to support the efforts of Smithfield Foods and all of our suppliers to phase them out.

‘Smithfield Foods was the first major pork producer that committed to phasing out gestation stalls, and we support the company’s transparency and progress toward this goal,’ Ms Forsell said.

Smithfield Foods’ own animal welfare advisor – the same Dr Grandin – has advised the mega farmers to end the use of gestation crates, says Mr Shapiro, but after committing to phasing the crates out within ten years in 2007, the company reneged in 2009 and now has no planned date for phasing the practice out.

Its actions have not gone unnoticed by Peta, who say that ‘animal abuse on factory farms is the norm, not the exception.’

Lindsay Rajt, associate director of campaigns at Peta US, told a reporter that cruelty is rampant, and spoke about the horrific treatment of pigs, from their eyes being gouged to three-minute long castrations of squealing piglets without the use of any painkillers.

Peta is calling on Smithfield to sign up to an eight-point care plan, which includes protection for whistle-blowers and a phasing out of gestation cages.

Pigs, Ms Rajt says, are extremely intelligent animals, suffering and experiencing pain and fear in just the same way as dogs and cats do.

McDonald’s and Smithfield Foods must, says the HSUS and Peta, put the issue of welfare at the top of their agenda and finally get rid of the inhumane practice.

‘It’s time for McDonald’s to make gestation cages part of the company’s past,’ said Mr Shapiro.

That ‘flavourful’ McRib is sounding more tasteless than ever.