Man gets rid of beard after 41 years without shaving 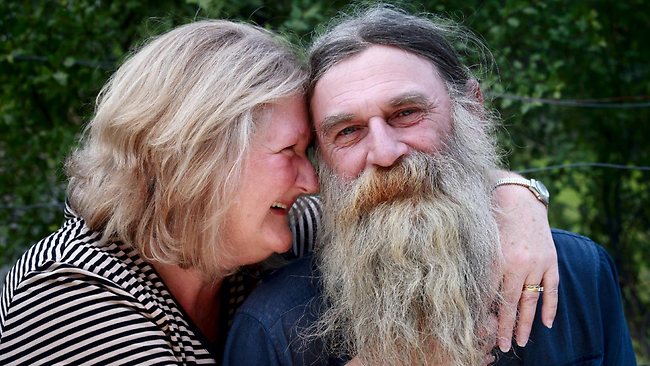 Until Friday night, Sue King had never seen her husband Rod’s face in 35 years of marriage.

After side-stepping his work’s clean-shaven policy for a decade, Mr King finally had to toe the company line to keep his job and shaved off his 20cm-long beard.

Daughter Jessica, 26, cried as she watched pieces of his mottled beard fall to the ground. “It’s not dad,” she said, wiping her eyes.

His other daughter, Emily, 30, looked on “devastated”, Mrs King, 58, bit her nails and shook her head and Mr King himself needed a bit of Dutch courage before the job was done.

But not everybody was happy with the end result.

“It just doesn’t look like him. It’s going to take some getting used to, he’d better hurry up and retire so he can grow it back again. I married him when he had a beard and that’s how I like him.” 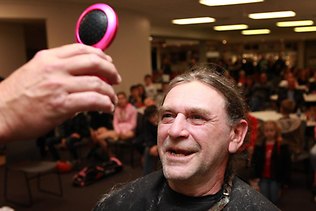 Mr King was quite overwhelmed himself…instinctively going to stroke his beard but finding there was nothing to run his hands through.

“It feels strange at the moment,” he said. “I shaved it for work purposes, the company has tightened up on it but that’s fair enough,” Mr King, who works as a stevedore and cleaner for grain-handling company Viterra said.

“I’ve honestly never thought about ever shaving,” he said.

“I don’t even know how to shave…I’ll probably cut my throat!”

Mr King used the opportunity to raise money for the Royal Flying Doctor Service…auctioning off the right to snip of bits of his beard at the Ravendale Community Sports Centre. Before having it shaved in front of a crowd of more than 50 people, Mr King said he was completely daunted by the idea of getting rid of the facial hair that had been part of his life for so many years.

“I don’t eat cream buns because it gets caught up in it and it’s been caught in the drill here at home before. I got too close to the drill and it pulled a chunk of it out,” he said.

Mrs King also has plenty of memories of his untamed beard.

“People ask what it’s like to kiss him. I joke I don’t kiss him but actually it’s very soft, it’s not prickly at all.”

Mr King said tomorrow he will be heading straight to get a new driver’s licence because if the police pull him over they won’t believe he’s the man in the picture.