A man from Esperance, WA is to appear in the Magistrates Court after he allegedly placed his dog in an esky and drowned it.

Michael David Hastie, 26, has been accused of also beaking his dogs leg before drowning it.

It had been reported to the RSPCA by a ranger, after Hastie had “boasted” of killing his dog because the dog had dug up his back garden.

I don’t know how to break this to Michael Hastie, but apparently…apparently, that’s what dogs sometimes do. It’s sort of in a dogs nature to dig. A bit like it’s in your nature to be a twisted fuck. Honestly, the world doesn’t need or want you breathing the same air. The world doesn’t need a Michael Hastie, if that’s what you think is normal. And hey, if you’re innocent, you’re innocent, but right now it just doesn’t sound like it. I don’t ever remember there being any smoke without fire.

I remember that the last person to be executed in Australia was Ronald Ryan. 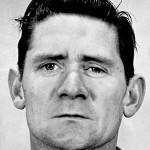 There were circumstances and some evidence that Ryan wasn’t guilty of shooting the prison guard.  If Hastie is found guilty of drowning this poor defenceless dog, then please, just this once please could we bring back execution. I don’t mind…lethal injection will do. If you can’t execute him at least then give him 50 lashes, or something. Ronald Ryan, may not have meant to kill the prison guard, and it actual fact, it may not even have come from his gun. But if Hastie is guilty of this crime, then that would mean that he meant it.

This is just a pre-plea to the Judge to give justice for a dog who didn’t have a chance. Some may say that it’s only an animal…no…it’s not just an animal, it’s a pet.

Hastie allegedly sat with the dog for more than an hour before filling the esky with water, securing the lid and submerging the animal.

Oh, and by the way, the dog was called Imi.