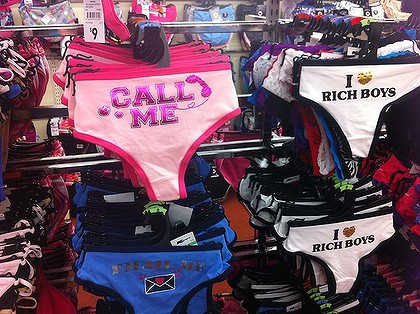 Kmart has been forced to recall a line of knickers with sexually suggestive text on them after a campaign by Twitter users.

Pictures of the underpants emblazoned with messages like “Call me” and “I [heart] rich boys” were circulated on the social networking website, enraging many users who claimed they were sexist and promoted the sexualisation of girls.

They were part of the Girls Xpress range which is aimed at teenagers around the aged 16 and up and underwear were on sale in Australia and New Zealand before complaints started rolling in.

A Kmart spokeswoman said the underpants were not aimed at children and were for sale in the adults section of the stores.

“We think there might’ve been some confusion because (the labels say) it’s size 8 to 18 and we think that people thought those were the kids ages,” she said.

“Any woman who shops knows a size 8 and knows it’s for women,” the spokeswoman said.

“(But) We took the feedback and recalled the stock because even though I think there’s been some confusion.”

But the founder of child advocacy group Bravehearts Hetty Johnston said the garments helped fuel a culture of sex aimed at girls.

“We as adults are the only ones who can protect our children, but we dress them up like prostitutes and fill their world with sexual messages,” she said.

“Kmart should be ashamed of themselves, it’s an absolute disgrace.”

Ms Johnston said people who were concerned about the sexualisation of girls should boycott stores that stock the underpants.