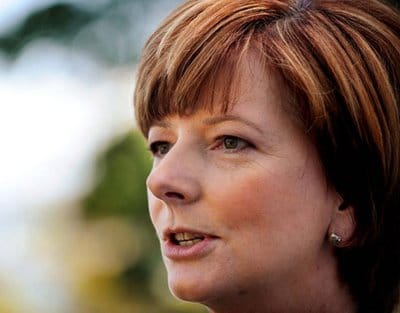 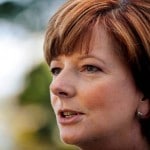 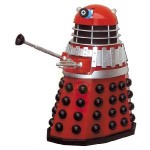 When Julia Gillard was in Brussels she showed a great deal of humility, by making fun at herself.

At dinner, of the opening day of the Asia-Europe meeting, the Prime Minister warned the audience before she spoke.

She jokingly said,”Perhaps I should start by saying that with my broad Australian accent, even the English speakers in the room may want to access the translation to make sure they’re understanding my words”.

And yes, Julia, I’m sure they would’ve ‘accessed the translation’ if there was an option for ‘Robot’ or ‘Dalek’.

Really, it’s lovely to see you joke about our language but…when…are…we…going…to…get…a…full…sentence…without…the…stopping…and…starting…

I don’t mean to harp on about this but we were warned that if robot speaking Julia Gillard got into power, it wouldn’t be long before she turns into a fully blown Dalek. For a start the nose is very similar to the plunger stuck on a daleks head.

She’ll be speaking in parlaiment one day, talking about the environment, you know, saying what the Greens want her to say, when all of a sudden, something doesn’t compute, and then she’ll start blurting out,”EXTERMINATE, EXTERMINATE”.

At that point Tony Abbott had better run for cover…or better still, find Dr. Who. Is he the only one that can kill Daleks? I’m not sure.

But, of course, Julia Gillard hasn’t got any children…so I don’t suppose she’ll know about that.

Before our beloved red-head goes gallivanting across the globe, and it is important to be there, please can you sort the many issues that are in Australia.

I would think that the most of us couldn’t give two monkeys about why you were in Europe…I’m sure of it.

Just remember the next time you’re looking at the TV guide, to see when Dr. Who is on, and you discover that it isn’t…just think who…might…be… behind it.