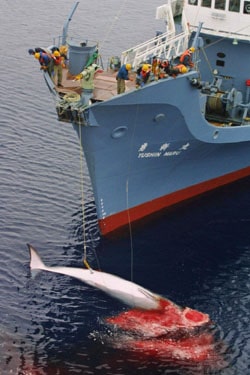 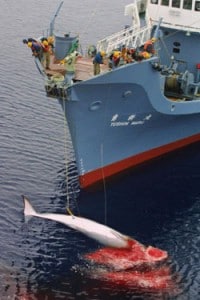 This week Japan cancelled the rest of its whale hunting season in Antarctic waters because of repeated harassment by Sea Shepherd activists at sea, after netting only a fifth of its targeted catch of 850 whales.

Sea Shepherd Conservation Society, which Japanese officials have condemned as a terrorist group for its annual harassment of the country’s whalers, hailed the result as a victory and said it would keep up the pressure next year.

Australia, which has campaigned against Japan’s whale hunt and wants to bring the issue before an international tribunal, also welcomed the halt, the first time whalers ended a season prematurely since Sea Shepherd’s campaign started seven years ago.

‘Every year we’ve gotten stronger,’ group founder Paul Watson said from the group’s protest vessel Steve Irwin. It is one of three devoted to the campaign, up from two last year.

‘We had better equipment, we had a longer-range helicopter…really, it came down to having more resources,’ Mr Watson said.

Japan’s ministry of agriculture, forestry and fisheries said the fleet would be returning home soon, though it did not provide an exact timeline. The fleet left Japan on December 2 and was scheduled to remain until at least early March.

‘We had no choice but to end (the season) to ensure the safety of lives, assets and our ships,’ fisheries minister Michihiko Kano told a news conference.

The Japanese fleet’s seasonal quota is 945 whales, but had targeted a catch of 850 whales this season. It will return home with roughly a fifth of that, the ministry said.

In past weeks, protesters have fired flares and bottles of rancid butter at whaling ships. They also once got a rope entangled in the propeller on a harpoon vessel, causing it to slow down.

Sea Shepherd has waged its campaign of physical intervention against the whalers for seven years, and disputes Japanese government assertions that its activists have engaged in terrorist tactics.

‘We haven’t committed any crimes,’ Mr Watson said. ‘We haven’t hurt anybody.’

The group’s efforts have drawn high-profile donor support in the US and elsewhere and spawned the popular Animal Planet series Whale Wars.

The whale hunts, which Japan says are for scientific purposes, are allowed by the International Whaling Commission as an exception to the 1986 ban on whaling, but opponents say they are a cover for commercial whaling because whale meat not used for study is sold for consumption in Japan.

Australia maintains the annual hunts breach Japan’s international obligations and plans to bring the matter before the International Court of Justice in the Hague.

‘I’m glad this season is over and Australia doesn’t believe there should ever be another whaling season again,’ Australian environment minister Tony Burke said.

Japan had temporarily halted the hunt on February 10 and said the suspension would last until conditions were deemed safe. But the government decided to call off the hunt after it said conditions had become too risky.

Greenpeace Japan points to another reason: It says the country simply does not need any more whale meat.

The group said it was not surprised by the government’s decision because it received a tip late last year that the whaling season would be cut short.

The amount of whale meat in storage has climbed sharply over the last several years. As of December, Japan held 5,093 tons of whale meat in its freezers, according to fisheries agency data.

‘And that’s the reason why the Japanese government had to decide to come back.’