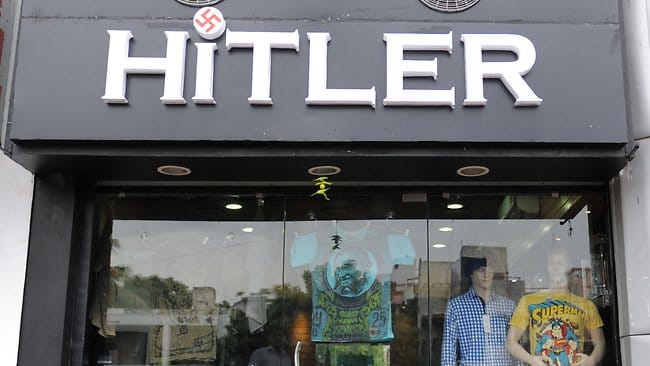 A men’s clothes store in India is being asked to change its name after the chosen ‘Hitler’ upset the local community.

Proprietor Rajesh Shah claims he was unaware that the name may cause offence as it derives from a nickname given to his business partner’s grandfather.

The ‘Hitler’-store has provoked outrage among residents and the small Jewish community in Ahmedabadin Gujarat province, north of Mumbai.

Mr Shah says no harm was intended when they named the shop.

“Until the time we applied for the trademark permission, I had only heard that Hitler was a strict man,” he said

“It was only recently that we read about Hitler on the internet.”

He says Hitler was a nickname given to his business partner Manish Chandani’s grandfather due to the man’s strict nature and has nothing to do with the Nazi dictator.

But local Jews disagree and say the owners knew exactly what the name meant.

“In the city of Mahatma Gandhi and non-violence, how can anyone celebrate a person like Hitler who is known to have murdered millions of unarmed ordinary civilians? We as a community had represented our concerns to the proprietors and we do not think they agree with us,” said Nikitin Contractor, convener of the Friends of Israel organization from Vadodara.

The clothes shop furore follows outrage in Italy where a supermarket in northern Italy was stocking wine bottles in Hitler poses, including with his arm raised in the Nazi salute.
Another was labelled ‘Mein Kampf” and another was labelled “Ein volk, ein Reich, ein Fuhrer” (one people, one empire, one Fuhrer).