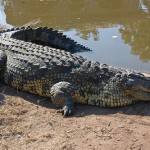 The monster was the largest of three saltwater crocs terrorising locals back in 1997.

It was caught and killed 13 years ago in Manangoora, 1,000km south west of Darwin, by Jeida Francis’s family after it started eating their animals.

But the remaining two monsters are still alive — and have now grown to the same size as this 6.5m GIANT.

Standing in front of the croc in the photo is Jeida’s cousin, Kellie Wright, now 17.

The croc weighed so much it took two powerful Toyota 4x4s to pull it from the Wearyan River.

“Ten members of the family set out to kill it.

“My dad threw some bait in the water which was tied to a rope.

“When the croc got it, the elders tried to trap it in the rope.

“It then thrashed around and nearly drowned itself as it wore itself out.

“It was a terrifying sight. I’d seen crocs before but never this big.

“When it was exhausted and tied up, they dragged it on to the bank and shot it.

“It had to be killed, it had been eating our goats and cattle.”

He added: “It’s crazy to think there’s another two out there.

“After we killed this one, the other two kept away. I think this was the dominant croc.

“From time to time we’ve seen the crocs heads in the water but they keep their distance.”