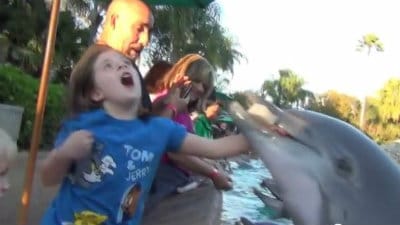 A hungry dolphin bit an 8-year-old girl at Sea World in Orlando, Florida, last week as she was feeding it scraps of fish.

Jillian Thomas of Georgia suffered three puncture wounds the size of dimes and a swollen left hand after the unexpected biting occurred, her parents told the Orlando Sentinel.

Jillian’s father, Jamie Thomas, captured the incident on video displaying images of his daughter being nearly dragged into the water with the dolphin that clamped down on her wrist as she looked away.

Thomas posted the video online as a warning to other parents.

‘The first thing I thought was I would have to jump in water and save my daughter’s life,’ he told the Sentinel, ‘I literally thought she was going to be pulled into the water.’

His daughter’s cuts are healing, he said, but Thomas and his wife are upset with the way Sea World employees handled the incident, saying they trivialized the severity of it.

‘Thank God it didn’t pull her in the water. It’s only a matter of time before someone gets seriously injured at this attraction,’ Thomas wrote in a message at the end of his video.

This isn’t the first dolphin bite the park has seen.

In 2006, two adults pried open a dolphin’s mouth to free a 7-year-old boy from its grip, which left a bruise on the boy’s hand, according to another article.

Sea World spokesperson Becca Bides at the time told the Sentinel that no changes were being planned for the attraction.

Jullian’s mother, Amy Thomas, said she would have been more careful if she had known her daughter might get bitten.

‘I felt safe,’ she said. ‘Everyone just imagines dolphins as smiling, non-biting animals with knobby teeth. You forget these are wild animals.’

The Thomas family said they do not plan to take legal action against the Orlando-based theme park, but said they would like Sea World to increase the age limit for children feeding dolphins and remind parents that dolphins aren’t always as friendly as they look.

And let’s not forget…remember that a dolphin is a wild creature.

Yes it does great tricks for fish and communicate and they look cute…BUT…they are not meant to be in captivity…however well looked after they are.

When will we ever learn…