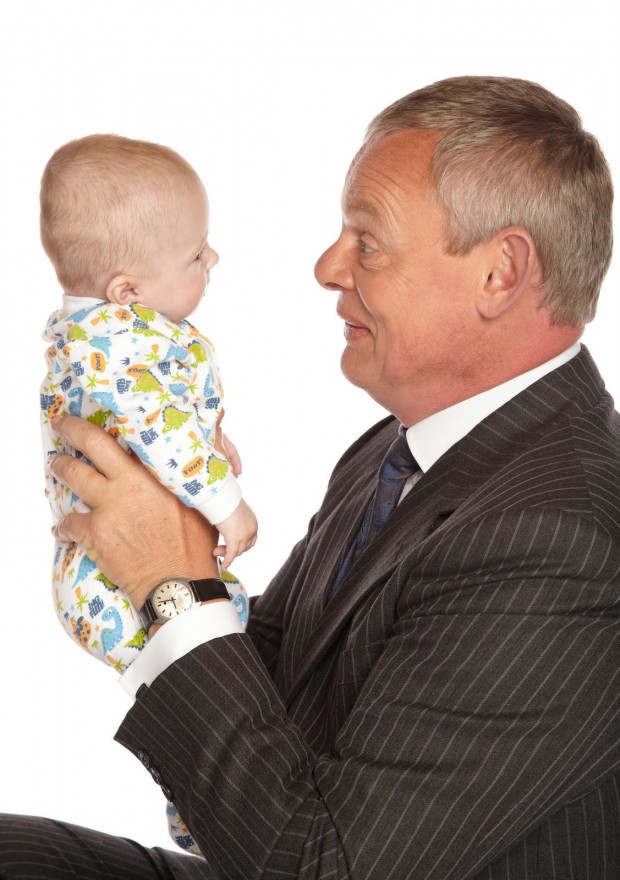 He plays a bad-tempered GP with an appalling bedside manner.

However, in the case of Martin Clunes, it would seem that life does not imitate art.

The actor has come to the aid of a baby boy who played his newborn son in the TV series Doc Martin, and who needs urgent funds for vital medical equipment.

Six-month-old Alfie Cane, who played the GP’s newborn baby James Henry, has a rare condition which means he cannot support his head.

He also has a misshapen skull, which could cause serious complications if left untreated.

His parents Tilly, 31, and Adrian, 40, need to raise £2,000 to pay for a helmet which can strengthen Alfie’s muscles and reshape his skull as it grows.

But after hearing of Alfie’s plight, Clunes donated hundreds of pounds worth of memorabilia that they can auction off.

Mrs Cane, a party planner, said: ‘We just cannot thank him enough. It is such a kind thing to do.

‘Alfie was his baby for more than three months on set and we are so grateful he has remembered him. His generosity will make sure our son’s future is healthier, brighter and pain-free. He’s sent us a huge box full of Doc Martin memorabilia, including the suit he wore on set, a signed script, photo and book.’

Mr and Mrs Cane, who live in Truro, Cornwall, with their three other children Victoria 13, Marcus, 11 and Billy, four, were told by the NHS that their son’s condition was mainly cosmetic, so he would have to join a long waiting list to see a specialist.

Knowing Alfie would have a better chance of improvement the  earlier he was treated, they sought private care – an expensive, but for them, necessary decision.

Alfie’s helmet – which he will wear for 24 hours a day for 18 months – will cost £2,000, money his parents say they simply do not have. But thanks to Clunes, he should have it in the next few weeks.

From the age of three weeks, Alfie was one of six babies used to play the son of Dr Martin Ellington and his headteacher partner Louisa (played by Caroline Catz) in the comedy drama, filmed in the Cornish fishing village of Port Isaac.

He appeared in every episode of the last series, which finished this month and had around 10million viewers.

A spokesman for Clunes, 49, the married father of a girl of ten, said: ‘Martin has kept in touch with Alfie and was really
happy to help.’