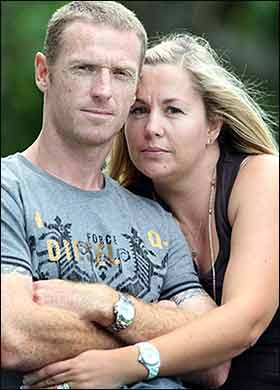 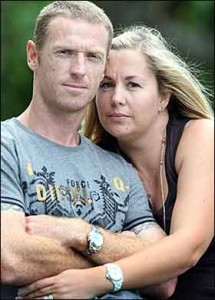 Aussie international Robbie Slater spoke out as ex-teammate Moore, 34, prepared to appear in court tomorrow following his arrest over an alleged boozy row with cops in Dubai.

But Slater said he hoped Moore’s status as a top sportsman could help him escape harsh punishment in the Arab state.

Dad Moore, nicknamed Skippy, was released on bail when his case was held over because Friday is a Muslim Holy day.

Last night his anxious wife, Heather was waiting at home in Oz for news.

And Slater said: “I’m very concerned about Craig. He’s certainly been caught in the wrong country. They don’t muck around over there.

“I can picture him, he’s a fiery character. But he’s a very experienced pro. The only thing I hope is the fact that he’s an international sportsman counts in his favour.”

Cancer survivor Moore – who played 175 games for the Ibrox side before leaving Glasgow in 2005 – was nicked in the millionaires’ resort on Wednesday.

Last night a distraught Heather said: “I can’t go over there. I’ve got two kids here and my job.

“I’m trying to keep things as normal as possible, but I’ve got a 12-year-old son Dylan who’s not silly and is asking questions.”

Yesterday a spokesman for the Australian Department of Foreign Affairs said: “Consular officials from Abu Dhabi are continuing to provide consular assistance to the man and his family in Australia, and are in contact with his lawyer.”

Meanwhile it was revealed that the federal government’s website carried advice to travellers going to the UAE that if they were arrested they could languish in detention for a long time.

It said: “If you are arrested, you may face a significant period of detention before your case comes to trial.

“You should familiarise yourself with local laws before you travel.”