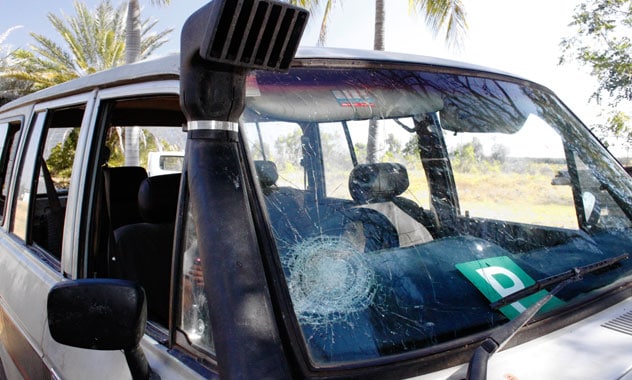 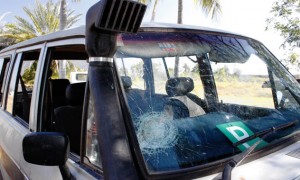 Kununurra police are investigating whether a vicious attack on five Aboriginal men was racially motivated after a group of balaclava-clad white men smashed their car with baseball bats.

The five men, aged between 18 and 23, feared for their lives when they were confronted by the group on an isolated stretch of the Great Northern Highway about 30km from Wyndham on Saturday night.

Their names have not been used because of their fear of recrimination. One of the men claimed he was chased into the bush by at least one white man who was shouting “monkey blood, we like monkey blood”.

The father of another of the victims said the attack had shocked the men’s families and he was worried the group had been targeted because they were Aboriginal.

“From what the boys tell me this sounds like something which happened in Alabama or America, not in Australia,” the father said

He said if police did not act quickly to arrest the offenders the matter could get out of hand. The group was travelling to Wyndham for a party when they stopped to relieve themselves.

One of the victims said two vehicles, which had been following them for about 70km, slowed and blocked their path.

“This one car just pulled up and hit the high beam and next minute our car was being bashed with baseball bats,” he said.

“There was about eight of them and they were all wearing balaclavas and gloves and long-sleeve shirts and pants. You could tell, through the balaclavas, you could still see their white skin.”

The men ran into nearby hills, escaping unharmed. But a 21-year-old man remained in the bush until daylight because he was too afraid to return to the highway.

The alarm was raised about 9pm Saturday after the 23-year-old victim hitched a ride to Wyndham with a passing motorist.

Kununurra police yesterday confirmed they were investigating the matter but refused to be drawn on the motive.

“We are investigating the alleged incident and I can say we have been given number plates of two vehicles which we are now following up,” the spokesman said.