A skin cancer that’s most common in WA 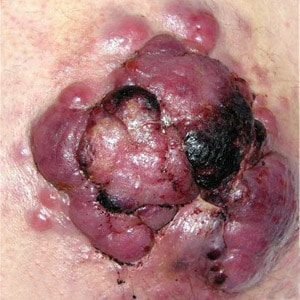 Scientists are warning of a little-known skin cancer that is deadlier than melanoma and more common in WA than anywhere in the world.

Merkel cell carcinoma is rare but significantly more aggressive than melanoma, which is considered the most lethal form of skin cancer.

A WA study, published in an international dermatology journal, reveals a bleak survival rate, with only a third of patients alive five years after treatment compared with 90 per cent of melanoma patients.

Scientists at the WA Institute for Medical Research used data from the State’s cancer registry to track trends in the skin cancer, finding rates in WA were the highest reported anywhere in the world.

It is the first time the cancer has been closely investigated in Australia, despite the country having the highest incidence of sun-related cancers in the world.

Unlike melanoma lesions which are often dark and uneven, merkel cell carcinoma usually appears as a raised pink or flesh-toned lump on the skin.

Professor Fritschi said the rate of merkel cell carcinoma was about twice that of other places.

It was commonly found on sun-exposed areas such as the face and the scalp, and the risk increased with age.

“Even if patients have the tumour cut out, it tends to come back,” she said.

“It seems to be a difficult skin cancer to treat and perhaps patients aren’t diagnosed as quickly as they are with melanoma, which is better known and has a more obvious appearance. This cancer doesn’t look nasty.”

Cancer Council Australia’s national skin cancer committee chairman Terry Slevin said the findings were another reason to take precautions when out in the sun.

“This study suggests rates here are among the highest in the world, which is consistent with results for other skin cancers and melanoma,” he said.

“While a lot of people think we’re making a big difference in our sun safe campaigns the hard numbers of skin cancer numbers are still going the wrong way and this is a reminder of that.”