Qantas gets all passengers to safety, again 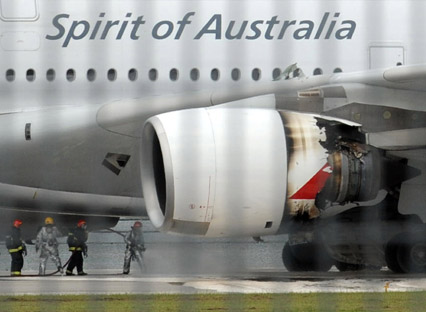 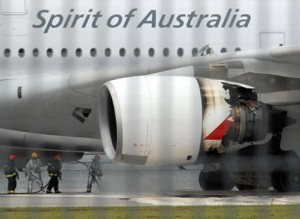 A QANTAS A380 jet with 459 people on board made an emergency landing in Singapore after a major engine failure saw it drop huge pieces of debris on an Indonesian island last week.

Qantas CEO Alan Joyce said the airline would suspend flights on all six of its near-new Airbus A380s until it knew what caused the incident.

While engine failures occurred regularly on all models of aircraft all around the world, today’s was yet to be explained

“We do take our safety reputation and our safety standards absolutely seriously and we’re not going to take any risks with passenger safety,” Mr Joyce said.

Parts of QF32’s second engine landed on the Indonesian island of Batam following the explosion shortly after take-off from Singapore’s Changi Airport.

Bound for Sydney, the two-year-old jet turned back and landed safely after 2.30pm, Australian time.

Witnesses said smoke was streaming from its undercarriage and six fire engines swarmed around as soon as it came to a halt.

Early reports said the aircraft had crashed but Qantas was quick to issue a statement denying this. None of the 433 passengers or 26 crew was injured.

As the crisis unfolded, Mr Joyce said the airline remained confident its experienced pilots would be able to handle it.

Passengers disembarked soon after the emergency landing and will spend the night recovering from their ordeal in Singapore, before boarding a replacement Qantas flight to Sydney tomorrow.

Their original flight was scheduled to arrive in Sydney at 8.15pm tonight.

Passenger Christopher Lee told ABC’ radio program that there was an explosion about 15 minutes after take-off.

“After leaving Singapore there was an explosion, there was a loud bang followed by another one, and then a rattling of the cabin,” he said.

“Some of the passengers then alerted cabin staff to the fact that there was an explosion, there was smoke or something to that effect.

“At that [point] we were still on take-off, the seat-belt signs were still on, the cabin staff came to inspect very quickly and then obviously alerted the captain.”

Locals in Batam, which is very close to Singapore, reported hearing a loud explosion and then seeing debris rain from the sky.

Pieces were about 1m long, some of them made of fibre.

One Batam man told local TV he was doing a renovations on the second floor of his house when he heard a loud explosion. He came out and saw the plane, with white smoke coming from its side.

Local policeman in Batam, Hartono, said officers were searching the area for more wreckage and. He said witnesses had seen smoke in the air after the explosion.

Mr Joyce said debris would be collected and examined by engineers from Qantas, Airbus and Rolls Royce, which manufactured the engines, and tests would be carried out at a Rolls Royce facility in Germany.

There would be some disruption for passengers as the investigation took place.

“There are two flights due to depart Los Angles tonight and one flight to depart Sydney tonight – they will be suspended,” he said.

“We will be accommodating passengers in hotels, making sure they’re looked after appropriately and we will be using the rest of our fleets to accommodate passengers on appropriate flights going forward.”

Australian Licenced Aircraft Engineers Association federal secretary Steve Purvinas called for a full investigation of the entire Qantas A380 aircraft fleet, saying safety was a growing concern for engineers as the airline outsourced more of its maintenance work.

“We know that the dramatic increase in the number of safety incidents involving Qantas jets coincides with an increase in the amount of work that is no longer carried out in-house,” he said in a statement.

Qantas has another 20 A380s on order from Airbus but Mr Joyce said today’s incident would not affect their delivery schedule. 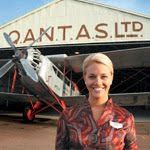 But I’d still rather travel with Qantas than anyone else.  The wolrd’s journalists are always waiting to jump on Qantas for any little thing, because there have been no fatalities. Yes, the engine did blow up, but the expertise of the Qantas pilots, co-pilots, navigators and stewardesses (not forgetting stewards). Qantas are  still the safest airline…and the stewardesses are top birds.