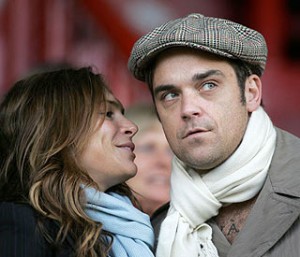 Robbie Williams has revealed that he wants a ‘Gay Baby’ with his new wife Ayda Field.

The newlyweds are keen to start a family as soon as possible, but personally, I think that the world could do without Cockhead Williams offspring.

Because if he has a child that turns out to be gay, it’ll be an exact clone of himself.

We’re all quite aware that Robbie might be a little bit…oh come on, it’s obvious.

This marriage won’t last. It’ll be like when Elton John married Renate Blauel. He was quite obviously gay and got caught up in trying to live a life as a heterosexual.

I could be wrong…maybe it will last…until Robbie Williams has a new album out, and because the last one didn’t sell as many, he’ll then come out that he’s gay and…oh fuck it, who really cares, I think you can guess the rest.

Take That recently teamed up with Williams and released a single called Shame. Quite ironic really. Because it’s a shame Take That took him back. They’d resurrected their careers quite alright without the Cockheads help.

The only reason he’s come back to them is probably because his records haven’t been doing so well. It may be because he just wants to be in the limelight. And I suppose if you’re used to being in the limelight all of the time, then it must be difficult when you’re not. But even still, the man is a wanker.

Robbie Williams states that him and Ayda spend so much time in bed that his Dad calls them John and Yoko. But I bet you didn’t tell him when you are in bed, you spend the whole time thinking of David Beckham.

On an Aussie radio station someone asked him if sex had stopped after marriage. Robbie said that it hadn’t yet and that him and his wife were having nice times.

Come clean and tell her that you’re gay, Robbie…otherwise it’ll all end in tears.