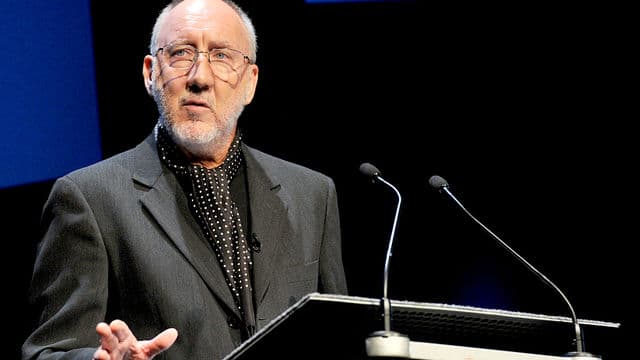 Music legend Pete Townshend laid into computer giant Apple, describing its music service iTunes as a ‘digital vampire’, as he called for greater support and financial rewards for artists from online firms.

In a keynote speech, The Who’s guitarist claimed the internet was ‘destroying copyright’, and said writers and musicians should expect to be paid if their work was generating money for others.

The guitarist…delivering the first annual BBC 6 Music John Peel Lecture at the Radio Festival in Salford, Lancashire, yesterday, said: ‘The word “sharing” surely means giving away something you have earned, or made, or paid for?’

However he reserved his greatest venom for Apple’s online music store iTunes, criticising it for creaming off profit without providing any support mechanisms for music acts.

The company is the market leader of around 70 legal download services, accounting for upwards of 75 per cent of all music downloads.

It also gives away a track from an emerging artist each week and has hosted a month-long festival each year that has featured 300 artists over the past five years.

Townshend asked: ‘Is there really any good reason why, just because iTunes exists in the wild west internet land of Facebook and Twitter, it can’t provide some aspect of these services to the artists whose work it bleeds like a digital vampire Northern Rock for its enormous commission?’

He suggested an eight-point plan to back the music industry properly, which included taking on ‘A&R’-style figures to act as talent spotters and guide, train and financially support young hopefuls as they do for record labels.

He said iTunes should also help artists to protect their copyright and free up space to allow them to ‘stream’ their music.

Townshend said the company should pay smaller artists directly rather than insist on payments through a third party ‘aggregator’, and also license artists it took on to give them physical releases.

iTunes did not respond to Townshend’s comments.

The musician – whose Lifehouse rock-opera predicted a concept similar to the internet 40 years ago – said people also needed to adjust the way they approached digital music.

‘It would be better if music lovers treated music like food, and paid for every helping, rather than only when it suited them.

‘Why can’t music lovers just pay for music rather than steal it?’ he asked the audience of broadcasting executives.

Townshend was critical of the environment which meant there was little reward for ‘creativity’, because it was not work which is paid at an hourly rate.

‘We now live in a digital world in which the only absolute is work by the hour,’ he said.

‘Creative work is not like that. Any one of the people listed above could create a method that would help other people to do their job in their place. This could be digitised, and made available on the internet.’

He continued: ‘However, if someone pretends to be me, or pretends that something I have created should be available to them free – because creativity has less value than an hour’s work by me as a musician in a pub – I wonder what has gone wrong with human morality and social justice.’