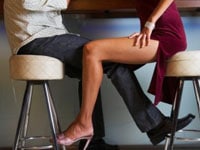 Meeting someone new is always nerve-racking, but meeting Elizabeth Kuhnke is particularly so.  As an ‘executive presence coach’ and expert in body language analysis, she has years of experience in reading the unspoken messages we send out.

So I’m not just worried about what I’m going to say to her — I’m also worrying about my posture and how to position my arms and legs.

In the flesh, she turns out to be ever‑so-slightly intimidating. A brisk, blonde fiftysomething (Kuhnke doesn’t ‘do’ age), she is dressed in immaculate beige and a lot of gold jewellery. But when we sit down and start talking, I find myself warming to her.

And no wonder, since she is sitting in exactly the same position as I am: leaning forward, hands on knees and maintaining eye contact.

Now, I don’t know whether I’m mirroring her posture or she’s mirroring mine — or whether any of it is conscious on her part. But it helps to establish a rapport between us.

‘For instance, how do you feel if I sit like this?’ she asks, throwing herself back on the sofa, legs splayed, arms akimbo. I tell her it looks disrespectful without even opening my mouth by instinctively leaning away from her with my arms folded.

Fortunately, my body language ticks her boxes. Apparently, I come across as open, approachable and friendly. Although, embarrassingly, when certain subjects are brought up (a husband’s workaholism, for instance), Kuhnke points out lines of tension across my forehead and around my mouth.

‘I can tell what a relationship is like between people based on the way they use their bodies when they speak about the other person,’ she says, as I hastily rearrange my face to avoid leaking any more marital secrets.

Kuhnke’s own interest in body language stems from a fraught childhood. ‘My parents separated when I was young,’ she says. ‘I started 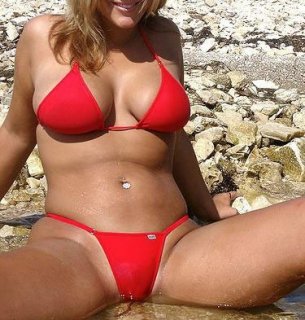 to understand that what people said wasn’t necessarily what they really felt.’

Her mother’s schizophrenia was also a factor. ‘Her body language told me a lot about her state of being,’ says Kuhnke. ‘People with mental illness will often act out what’s going on inside them with great clarity.’

She found that the confident, expressive gestures that worked for her in the U.S. could be perceived as aggressive in Australia.

‘I was overpowering,’ she admits. ‘My gestures were big because that was the world I came from. If you slow down in New York, you get run over. But here, people responded with defensiveness. I learned to become more contained and controlled, and less forward in my actions.’

She decided to turn her expertise into a career. Now she coaches people in business.

‘I work with a lot of young women who are so contained that they can’t make an impact,’ she says. ‘Women tend to give away their power. We cross our legs when we sit down and make ourselves smaller, where guys sit with their legs spread wide and take up two spaces.

‘Often, younger women will walk into meetings carrying things — a book or a pad of paper — against their chests. It’s a form of self-protection, but it makes them look like the worker bee rather than the executive. You won’t see a man doing that.’

But effective body language is important for everyone, not just the ambitious. Whether you want to discourage someone from pushing into the queue in front of you, persuade the traffic warden to let you off that ticket or catch the eye of the cute stranger, your body language can make all the difference.

‘The eyes are the windows to the soul. It’s a cliche, but it’s true,’ says Kuhnke. Many of the non-verbal messages you make with your 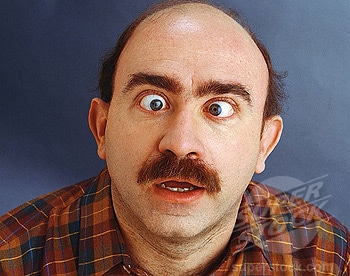 eyes are beyond your control. Your pupils will widen when they see someone or something they like, for instance.

But there are still tricks you can try consciously. To build rapport with someone, Kuhnke recommends meeting their gaze between 60 to 70 per cent of the time. Bill Clinton, for instance, famously lets his gaze scan slowly over the other person’s eyes and face as he speaks, creating the impression that no one else matters.

Our faces can make more than 250,000 expressions and our hands are capable of 5,000 gestures

And other politicians are equally adept at using their eyes to get positive messages across.

‘During the General Election leadership debates, it was obvious that Julia Gillard had been coached to look up to his right — the so-called “position of vision” — with an expression of hope in his eyes,’ says Kuhnke.

Conversely, you can use your eyes to intimidate. One way is by deliberately avoiding eye contact.

And if you’re in a group and feeling bullied, let your eyes move slowly from one person to the next without blinking. Move your eyes first and let your head follow, keeping your torso still. Think Arnold Schwarzenegger in The Terminator.

Open arms indicate a confident, constructive attitude and create a positive impression, says Kuhnke. Cross your arms and others will see your attitude as defensive and off-putting.

So if you’re trying to influence or persuade someone who’s sitting with crossed arms, it’s a good idea to give them something to do or to hold, so they have to unlock their arms. It will lead to a more open attitude and you’re more likely to succeed in changing their mind.

When you first meet a group of people, demonstrate status by not folding your arms. Instead, keep them by your sides or in the ‘power position’, with one hand resting on top of the other in front of you at waist height.

At a party and feeling insecure? Hold your glass in front of you with both hands. This creates a subtle barrier. 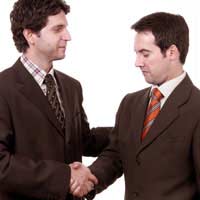 Your handshake says a lot about you. A handshake like a wet haddock gives an impression of aloofness, though in women it can be read as femininity. Some men use a bone-crunching grip, but it’s taken as over-compensation for ineffectiveness.

A firm handshake is best. If you want to show you have the upper hand, do so literally by making sure your hand faces slightly downwards in the handshake.

But what if someone grabs your hand in the power shake and you want to re-establish control? Put your left hand on top of their right hand to create a double-handed shake. From this position, you can straighten the handshake and subtly regain control.

Politicians are adept at this, says Kuhnke. ‘What you often see when some people shake hands is that one will get his hand on top, and then other will put his left hand on top of the person he is shaking hands with…they’re both fighting to be the top dog.’

We demonstrate our status by the way we stand. If you want to be perceived as powerful and in control, stand with your legs slightly apart. Tall people immediately command respect because of their height, but often slouch to diminish themselves in stature, giving away their authority.

Shorter people have to create an image of height. ‘French President Nicolas Sarkozy is such a little guy but he walks like a tiger, hands clenched, mouth tight, to show power,’ says Kuhnke.

The straddle stance, with legs apart and hands on hips, is a typically male posture.

The scissor stance, legs crossed, favoured by many women, relays various messages — all negative: submission, negativity, insecurity and immobility. So un-cross those legs!