Is the thong disappearing up womens arses?

Just a thong at twilight, when the lights and the VPL are low? Not any longer, ladies. Not any more.

For the most excellent news is that there is a lingerie god, after all.

The thong is disappearing…and I don’t mean into some fat birds arse.

The popularity of the thong, the G-string, the whale tail…call it what you will…has suddenly plummeted. Sales have gone down 17 per cent from their peak in 2003, with the result that thongs are now worth only 23 per cent of the total knicker market. Some say their decline is a rejection of overtly sexual clothing, others that it represents a national sigh of relief.

For thongs are being replaced by the purchase of more comfortable undies such as boy shorts, big pants and knickers that could double as yacht sails on a breezy weekend.

Fashion chain Peacocks says it is the first time ever that classic, full-sized knickers have outsold skimpier styles.

One European retailer reports a 500,000 boom in the sale of Brazilian knickers; a sort of demi-pant that gives a smooth silhouette, with no hint of VPL.

Which means that not only are thongs shrinking, they are becoming redundant, too.

And it is not just that women don’t need them any more. Neither is it that a three-pack of sensible midis are cheaper than their thong equivalent. Apparently, it is more that during difficult economic times, our need for comfort exponentially increases. From the pants on up. 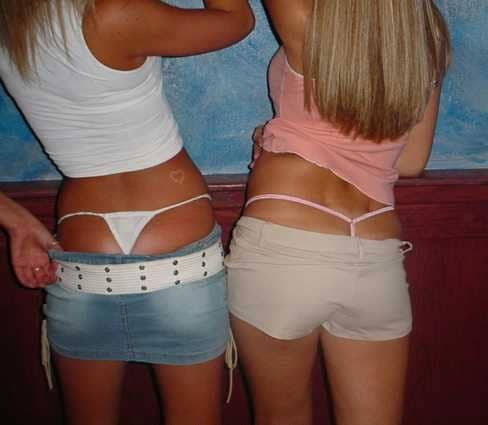 We haven’t felt this good since we rejected the horror of the three-studded, crotch-buttoning ‘body’ 30 years ago. Back then, in the Eighties, designer Donna Karan said she was liberating women when she invented the all-in-one body. But that turned out to be another lingerie lie. Yes, the body gave a smooth line under that pinstripe power-suit, yet it was hell answering a call of nature in a confined space.

Such an ignominy never happened to Melanie Griffith in Working Girl, but it happened to everyone else. And who could forget Patsy in Absolutely Fabulous, who always forgot to re-stud her body after one or two bottles of Bolly.

Yet, at least bodies had their uses. They offered a certain amount of security and ease, with their ability to actually cover whole buttocks and keep the wearer safe and cosy.

Not claims one could ever make about the thong.

Will anyone mourn the passing of this shirred shred of hanky panty? Or do we quietly say, ‘Get lost once and for ever, you catapults of elasticated containment!

Like ducking in the village pond or being accused of witchcraft because you have a mole on your chin, surely there can be no place in a civilised society for the thong.

No, not even those lovely ones from Stella McCartney.

Thongs are not even a proper pair of knickers. They are just a nod to public decency, a frilly piece of tokenism that first emerged in Thirties strip clubs. 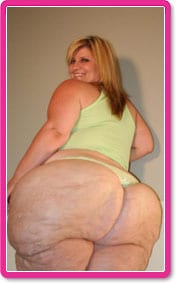 Don’t get me wrong…thongs ARE very sexy…but why do obese women want to show everyone that they’re wearing one AND think they look sexy in a pair.

In the Seventies, thongs became a fixture of South American beaches as a practical way of exposing the maximum acreage of skin available to tan without actually getting yourself arrested. From such ignoble beginnings, thongs swiftly moved from beach to bedroom to High Street, colonising a generation of knicker drawers and knicker wearers as they did so.

However, they staggered on, up to and throughout the Noughties, determinedly presenting themselves as a sexy antidote to visible panty lines.

We are still wearing tight pencil skirts, jeggings and leggings, but now that there are so many other lingerie solutions to VPL, the age of the thong is almost over.

True, there is nothing brief about the mid-thigh brief, but they banish panty lines with a steely resolve that the mimsy thong could never muster.

And never mind the wincing discomfort, perhaps what really did for thongs in the end was their association with tabloid 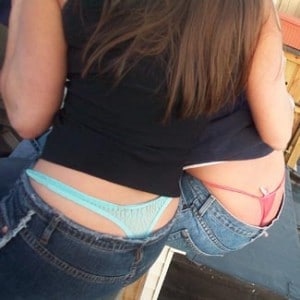 The thong is the default dress code for wronged WAGs everywhere. Not to mention the fact that the thong has a place in history, too.

Monica Lewinsky was a 21-year-old White House intern who delivered pizza to President Clinton, then flirted with him and flashed her thong.

That one twang of elastic was the starting gun for an 18-month relationship that almost brought down the U.S. presidency and would go on to tarnish both their reputations for all time.

Would things have been different if Monica had been wearing a sensible pair of ‘full briefs’? Or, perhaps, even some impenetrable body-defining shapewear?

Probably not. We all know that it would have taken more than a pair of flesh-coloured Spanx to dampen Bill Clinton’s ardour when he was hot to trot.

This alone makes him a unique and exceptional man.