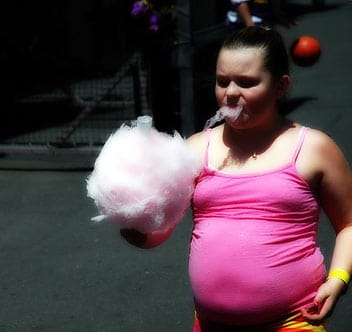 Already we know that ‘puppy fat’ is a myth; fat children don’t ‘grow out of it’.
Fat children become fat adults.

Children get too clever by half, too, snaffling their booty behind parents’ backs and stifling their giggles when asked who ate all the pies.

Often, parents don’t notice their children are heading for a problem…a problem, by the way, which increasingly afflicts families across the social divide.

From sink school to prep school, tubbies are becoming the norm. And if all the other eight-year-old boys are letting shirts hang loose, rather than tucking them in, it can look more like a fashion than a wilful effort to hide flab.

Your child doesn’t stand out from the crowd, so why should you worry? Some parents even take comfort from their children’s gorging: a ‘good appetite’ is traditionally a sign of health and, after all, we’re supposed to keep a weather eye out for anorexia, aren’t we?

A friend of mine was confronted with the problem of a child’s weight last Christmas, which led to their toddler granddaughter being admitted to hospital.

She was flatly refusing to eat, her weight was dropping, and as a family we were scared stiff.

There was obvious relief when she decided (for no apparent reason) to eat again was such, that she was given anything…and I do mean anything…she wanted.

Later, when she was fully better, the parents had to force themselves to replace that relief with common sense and adjust her diet accordingly.

What if those past anxieties had blinded my friend to the prospect of her being overweight in future and we had allowed her just to keep eating everything in sight?

Would it have been fair to accuse us of simple ‘neglect’?

I do have a degree of sympathy for the parents in many cases.

And yet, in spite of that sympathy, in spite of a loathing of state interference, in spite of supporting laws that grant authority to parents, I think Dr Ludwig is right.

Obviously, nobody should favour taking children into foster care for the sake of a few extra pounds, nor as anything other than a last resort. But equally obviously, when it comes to obesity, action is long past overdue.

Already we know that one in ten children are obese when they start primary school, rising to one in five when they leave at the age of 11…and remaining at one in five throughout secondary school.