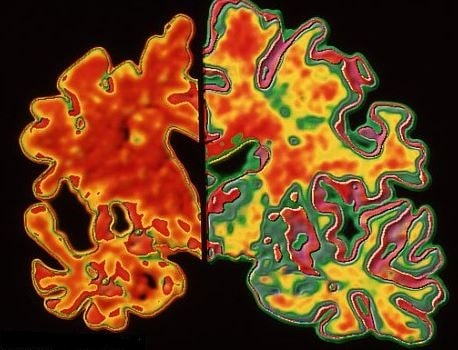 Alzheimer’s could in some cases be caused by an infection and the disease could even be contagious, scientists have claimed.

This computer graphic compares an Alzheimer’s brain (left) with a healthy brain. It is shrunken due to the degeneration and death of nerve cells

The damage to the brain caused by the neurological condition is similar to that caused by infectious diseases such as mad cow and the human form CJD.

In tests on mice, they found that it occurs when a normal protein becomes misshapen and then spreads by turning ‘good’ proteins into bad ones. A similar process is seen in both mad cow disease and CJD

The degenerative condition is the most common form of dementia and affects millions of people throughout the world.

It is estimated that it affects on in 14 people over the age of 65.

It can be inherited in some cases.

Author Terry Pratchett is a high profile person with the disease.

The condition is caused by parts of the brain wasting away, particularly in the cerebral cortex.
As the grey matter wastes away, clumps of protein, known as ‘plaques’ and ‘tangles’, start to form in the brain. The plaques and tangles start to destroy even more brain cells.

Later symptoms include severe confusion and dramatic changes of personality. A sufferer can also experience delusions.

There is no cure though there are some treatment that can slow the disease’s progression.

The disease can shorten life-expectancy as sufferers can lose interest in eating and maintaining personal hygiene, leading to other illnesses.