Sir David is back with Frozen Planet 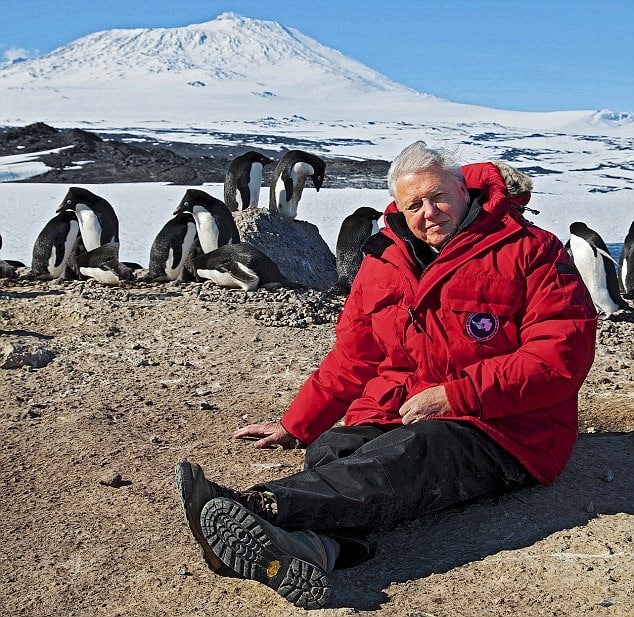 Nothing fascinates me more than the sight of Sir David Attenborough, the Greatest Living Briton, explaining Darwin’s thesis from a rainforest, mountain top or frozen wasteland.

Sir David is back on our screens in a new series on the Earth’s poles, which promises a show of dazzling brilliance no one else can hope to match.

Frozen Planet tells the story of the most extreme wildernesses on Earth, and as well as whales, seals and penguins it stars one of the most extraordinary humans alive, a man who is about toenter his seventh decade in broadcasting.

It’s been 32 years since we last saw Sir David – even then no spring chicken at 53 – with the playful gorillas of Rwanda in Life On Earth. In the coming weeks, we will see him, now 85, standing on the North Pole for the first time in his life, and sprawled on an Arctic ice floe as a baby seal mewls a foot away, while a few inches below the ice a gigantic killer whale is poised to strike.

‘I never thought I’d get to the North Pole,’ he says. ‘It’s a magical place, amazingly beautiful. I think this will be a landmark series and stand for years to come as a monumental survey of polar regions.’

Creating these series is a huge undertaking, an exercise in logistics and planning more akin to preparing for a war than making a TV programme. I was fortunate enough to spend some time up on the Greenlandic icecap, where the Frozen Planet crew was investigating the way this vast sheet of ice seems to be cracking up.

It was a cold, terrifyingand awe-inspiring experience. Take rope expert Tim Fogg, who is the chap you need if you want to descend into what seems like the open maw of a frozen hell – a massive crevasse.

Ropes acquire an urgent fascination when they’re all that lies between you and an icy death.  Together with fearless camerawoman Justine Evans and a couple of glaciologists, Tim is dangling some 200ft below me.  All that keeps them from falling half a mile to a dark demise is a flimsy-looking spider’s web of nylon twine attached to the ice by a series of poles. 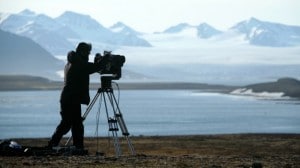 I peer over the edge, hoping my spiky crampons will be enough to stop me sliding into oblivion. Series producer Vanessa Berlowitz insists the BBC ‘never cuts corners’, and will do whatever it takes to get the best shot in utter safety. If someone has to dangle off a cliff, into a cave or, as here, into an icecap, they call Tim.

If they want to get an aerial shot that starts off with the whites of an individual caribou’s eyes and then pans out in a single shot to show a vast herd covering what looks like half of Canada, they call picture ace Richard Burton, whose Cineflex camera is the only one in the world that can do this.

Mounted on a helicopter, the Cineflex uses a revolutionary system that compensates for aircraft movement and is operated by a cameraman who sits inside the helicopter and controls the zoom and direction of view using a joystick.  Because the camera allows filming from way above the animals it provides a new angle on their behaviour without disturbing them – be they wolves pack-hunting buffalo, baby beluga whales piggy-back riding their mothers or a mother polar bear suckling her cubs.

Despite all the precautions, filming in these places carries unforeseen risks. One day Sir David – who Ms Berlowitz describes as ‘utterly stoic, professional and gentlemanly at all times’ – voiced his concerns about a small crack that opened up in the sea ice next to the tents. Equipment was hurriedly carried across to safer ground, just before the crack opened up dramatically.

The big problem for the Natural History Unit is topping what they have done before. We have already seen polar bears fighting walruses and herds of caribou thundering across the Canadian tundra. So what does Frozen Planet show that we have not seen already? A lot, actually.

The poles are fairytale landscapes unlike anywhere else on Earth, where whole seas can freeze over in a fortnight and icebergsas big as nations can set sail across the Southern Ocean. And these poles are changing before our eyes.  On the shoot, the team was attached to a scientific expedition led by a workaholic glaciologist called Alan Hubbard, whose job is to see what is happening at the bottom of the icecap – hence the plunges into the crevasse.

One of the spectacular sapphire-blue lakes that pepper the icecap in high summer (and which are forming earlier and getting bigger) simply disappeared down a hole in the ice – several billion gallons of water in a few minutes, accompanied by a rumbling icequake that left a crack across the mess-tent floor.  Sir David himself was quietly sceptical about climate change until quite recently but now says he is convinced by the scientific evidence that says the world is getting warmer. 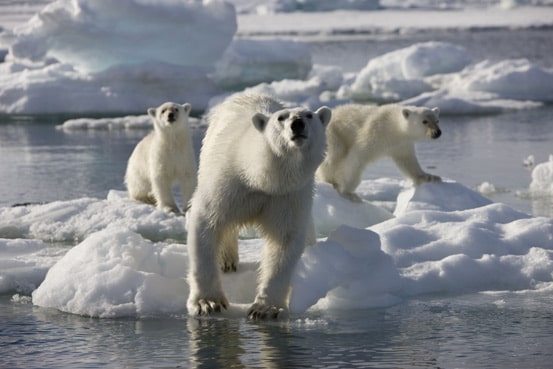 His conversion came a few years ago at a scientific conference. ‘I came out of it with no doubt that we were increasing carbon dioxide levels, and that it was having an effect,’ he says. Although he says ‘this series is not a polemic,’ insisting preaching will not get the message across, Sir David is gloomy about the future. ‘This may be the last time you can see some of these things,’ he says.

Things like love-scarred polar bears. We have seen plenty of polar bears before, but the footage of a huge male, bloodied and unbowed as he sees off dozens of suitors for his mate before plodding off into the distance, never to see his cubs, is new and hugely moving.  And the footage of two dozen Canadian wolves bringing down a massive bison is gruesomely compelling.

Vanessa Berlowitz and her team are justly proud of their firsts.  A descent into the spectacular ice caves of Mt Erebus in Antarctica, for instance. We see a pod of killer whales creating giant waves to knock seals from ice floes – considered by scientists to be the most complex team hunt ever filmed in the wild.

And we see, for the first time, the ‘brinicle’, a 10ft icicle breaking off from the frozen surface of the sea and plunging towards the ocean floor, killing everything it touches like an alien death ray.  Sir David also returns to Scott’s Hut in the Antarctic – he first went there 17 years ago – where the explorer and his team spent a gruelling winter before perishing in the snow and ice on their doomed expedition to the South Pole in 1912. ‘It is just as Scott left it’, he says.

‘It is perhaps the most evocative place I’ve ever visited. You feel the presence of particular human beings more powerfully there than anywhere.’

All of this does not come cheap. Frozen Planet took four years to make, involved the chartering of 28 helicopters, 33 Skidoos and the help of HMS Endurance for three months. Bear this in mind the next time someone suggests axing the licence fee – because the cold, harsh reality is that without it series like Frozen Planet simply could not be made.