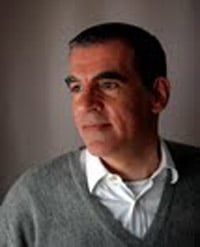 The irony is that author Michael Arditti, started eating goat’s cheese for the sake of his health.

In his 20s he suffered from debilitating depression and spent several years during the mid-Eighties in and out of clinics on a range of noxious drug regimes that did nothing to help.

He took an experimental course of lithium treatment made his legs swell as though from elephantiasis.

He saw a dietary therapist who proved to be inspirational. She explained how the toxins in food generated toxins in the brain, an insight that reached back to Greek philosopher Hippocrates, who had declared, ‘Let thy food be thy medicine and thy medicine be thy food.’

Michael gave up meat, wheat, alcohol, tea, coffee, processed food and as many E-numbers as he could, in addition to dairy products which the therapist declared to be ‘no use after you’ve been weaned’.

The change of diet, combined with psychotherapy, set the author on the road to recovery. He threw away the pills and, over the next decade, worked as a theatre critic, as well as writing his first three novels.

The veto on dairy related exclusively to cow’s products.

So he was allowed sheep’s and goat’s cheese and, since most varieties were either expensive or bland, he relied on a friend who brought him some of the more pungent and flavoursome cheeses.

Several, however, were made from unpasteurised milk and one contained a bug which, in the autumn of 2001, changed,  and very nearly destroyed, my life.

The first sign that something was wrong came in a series of stabbing pains at the base of Michael’s  spine. Initially, he self diagnosed them to posture, an occupational hazard for one who spent much of the day hunched over a computer.

When, after a few days, the pains grew so intense that he could barely move, so he rang his doctor.

Although he hadn’t not seen him for 14 years, the doctor felt confident enough to offer a diagnosis over the phone. ‘You’re very tall, Michael. Tall people get sciatica. You have sciatica.’ With that, he prescribed a week in bed.

A friend urged him to consult a specialist team of cranial osteopaths. At the end of the first treatment, during which they applied gentle pressure to various points of his body and rebalanced my energies, the pain had dwindled and he felt full of hope.

By the following morning, the pain had returned as excruciatingly as ever. After speaking to osteopaths, explained that a course of treatment might be necessary, which turned out to be the case.

Over the next five weeks, the osteopaths visited almost daily, their visits providing marked but shortlived improvements in his condition.

In retrospect, it seems extraordinary that Michael should not have protested but, at the time, he was extremely vulnerable, suffering agonising pain and willing to trust anyone who could offer even temporary relief. Moreover, his long-standing distrust of drugs, dating back to the noxious anti-depressants had left him reluctant to make a further call to his doctor.

When he was forced to cancel a holiday, the osteopaths accused him of being scared to take risks and finding an excuse not to go. In his enfeebled state, he believed them and to be honest, who wouldn’t believe them.

Michael Arditti grew steadily worse until a horrified visitor, over-ruled his objections and summoned a doctor who rushed him to hospital. There he was diagnosed with discitis, an infection of the spine between the vertebral discs.

The condition had been left so long, he had developed septicaemia.

For several days, his life hung in the balance, but was saved by the skill of the doctors and because he’d never taken antibiotics during the previous decade, he was particularly responsive to the massive doses that he was given.

The everyday details of his hospital stay have vanished in a morphine-induced haze, the self-administered pump being essential to relieve the constant, searing pain.

The bug destroyed two discs at the base of my spine causing the vertebrae to fuse, in the immortal words of his consultant, ‘worse than we hoped but better than we feared’.

It rendered Michael permanently disabled and sent him hobbling into middle age, since nothing destroys the illusion of youth more decisively than the need for a stick.

I slowly rebuilt my life. My mobility and other physical functions have been greatly impaired. I need assistance with a raft of simple tasks from carrying my shopping to making my bed, although I am fortunate to the extent that I can still work.