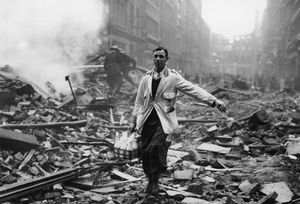 On this day, German aircraft blanket incendiary bombs over London, setting both banks of the Thames ablaze and killing almost 3,600 British civilians.

The German targeting of the English capital had begun back in August, payback for British attacks on Berlin. In September, a horrendous firestorm broke out in London’s poorest districts as German aircraft dropped 337 tons of bombs on docks, tenements, and teeming streets. The “London Blitz” killed thousands of civilians.

December 29 saw the widespread destruction not just of civilians, but of great portions of London’s cultural relics. Historic buildings were severely damaged or destroyed as relentless bombing set 15,000 separate fires. Among the architectural treasures that proved casualties of the German assault were the Guildhall (the administrative center of the city, dating back to 1673 but also containing a 15th-century vault) and eight Christopher Wren churches. St. Paul’s Cathedral also caught fire but was saved from being burned to the ground by brave, tenacious firefighters. Westminster Abbey, Buckingham Palace, and the Chamber of the House of Commons were also hit but suffered less extensive damage.

Fighting the blazes was made all the more difficult by an unfortunate low tide, which made drawing water a problem.