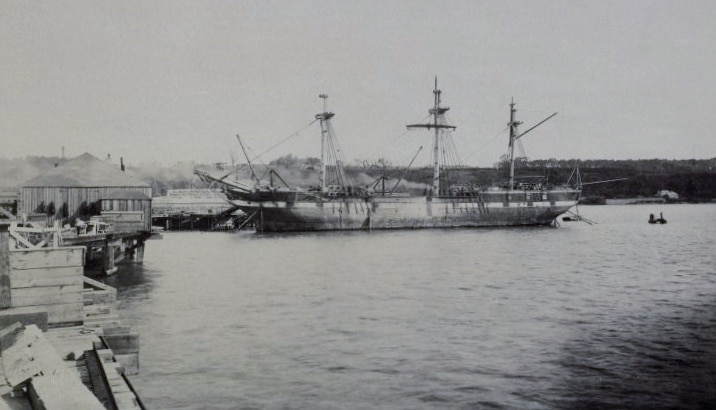 On this day, 9th January 1868, the last convict ship to transport prisoners to Australia (the Hougoumont) arrived at Fremantle, Western Australia.

The prisoners would have been excited but also fearful. The heat would have been spmething they’re not used to for a start…and that’s before they realise that every bloody thing can kill you.

One convict died on the 89 day journey the Hougoumont had been at sea – a rapist from Manchester…I suppose that can be described as a ‘good death’.

Due to the reasonably high number of literate convicts from the complement of political prisoners from Ireland, called the Fenian Rising the previous year, the voyage even had its own newspaper: The Wild Goose, of which all seven handwritten issues survive in the State Library of New South Wales. What’s even more interesting is that most convicts would have been iliterate…so who were the Fenian Rising writing for…that’s Irish for you…

The startling legacy of the convict era documents that transportation wasn’t as bad as its legacy decries. Most of the prisoners got access to medical care and to meat, and their children were often markedly taller and stronger – bang goes the theory that the sun grew the Aussie footballer into the giant he is (not including Hayden Ballantine, of course).

Some crimes were even carefully premeditated to warrant transportation with a lenient sentence as an escape from poverty in Britain, or to join family members.

The Hougoumont itself was no stranger to penal transportation. It was originally owned by Duncan Dunbar, who between 1840 and 1868 provided nearly a third of the ships that transported convicts. Under the direction of Luscombe of London, it set off from the Sheerness, on the Isle of Sheppey in the Thames Estuary, on the 30 September 1867, sailed along the south coast of Britain to Portland in Dorset to pick up more convicts, and finally departed Portsmouth on the 12 October, with 280 convicts and 108 passengers, helmed by William Cozens.

The complement of convicts included 62 Fenians, including 17 from the military, a contingent which contravened an agreement between the United Kingdom and Western Australia, leading to a brief panic in Fremantle. The inclusion of military Fenians also flouted the UK’s unwritten policy not to transport military prisoners.

This final complement of convicts signalled the end of a significant period in Australian history. Between 1788 and 1868, more than 165,000 convicts were transported to Australia, of which 10,000 were sent to Western Australia.

Now, it is estimated that two million Britons and four million Australians have convict ancestors.

Without convict labour, the first arriving with the First Fleet in 1788, Australia might have initially struggled as a British colony, especially after 1810, when convict labour was increasingly used to develop the colonial infrastructure of roads, causeways, bridges, courthouses and hospitals.

By the time penal transportation ended, Australia had grown to a population of more than 1 million – compared to just 30,000 in 1821 – and it was finally large enough to be autonomous, to sustain itself and grow.

And while the shroud of convict transportation has hung over Australia’s shoulders as somewhat of a negative stereotype, there’s no doubt it wouldn’t be the country it is today without them.