What will Shane think when Liz cougars it up 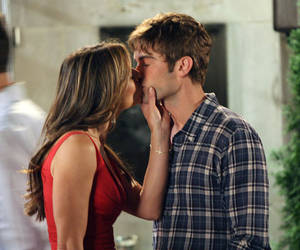 On a street corner on New York’s Upper East Side, a cougar moves in for the kill.

This is how a scene of Gossip Girl played out this week when Elizabeth Hurley arrived on set to film her role with her much younger co-star Chace Crawford.

The 46-year-old was pictured gripping the 25-year-old’s face firmly as she pulled him close and planted a kiss on him.

Chace stood passively with his hands in his pockets, but didn’t seem too upset by the aggressive move by the attractive older woman.

Elizabeth looked typically sexy in a plunging red dress as she began work as her glamorous character Diana Payne.

The model and businesswoman looked in her element as she filmed the saucy scenes, at one point throwing a cheeky smile at photographers over her shoulder.

With her long brown hair highlighted, she looked stunning in a sleeveless scarlet red dress, nude heels and a designer beige bag, while Crawford, 25 wore a more casual checked shirt and jeans.

At one point, the actor, who plays blue blooded Nate Archibald in the show, looked focussed as he filmed an intense-looking scene with Hurley.

The actress cut a striking figure in the low cut dress, which also showed off her long slim legs.

Earlier the pair were spotted looking more relaxed as they rehearsed the scene, dressed in casual clothes.

They both clutched scripts and laughed and chatted as they stood together on the New York side walk.

TV Line.com reported that executive producers Stephanie Savage and Joshua Safran have said Hurley’s character is ‘a sexy, smart, self-made media mogul and all-around force to be reckoned with.

‘Diana’s entrance on the Upper East Side will change the lives of all our characters – including, and especially Gossip Girl herself,’ they said.

‘Elizabeth’s sense of humour, intelligence and beauty fit the GG world perfectly. We feel very fortunate to have her.’