Ronnie Wood proposes, but all’s not as it seems 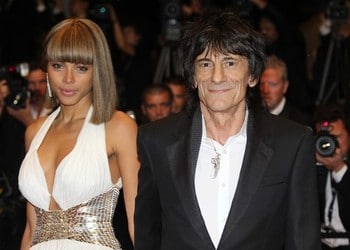 She had accepted with delight, according to her spokesman, and the two of them were planning to marry in the summer of 2012 in Brazil. The jeweller Rachel Galley had been commissioned to design the rings for the happy couple.

The only trouble with this touching tale — told to this newspaper by her PR last month — was that it wasn’t actually true, at all.

Ronnie, now clean of drugs and alcohol, insists that he hasn’t proposed. No wedding is planned, and no jeweller has been commissioned.

Even by the somewhat rackety standards of Wood’s complicated personal life, this is a hard-to-explain divergence of events.

Ronnie, who is now 64, is a man who can be amiably vague and easy-going, but he is most certainly not the kind to be mistaken on such a large issue as this – particularly as he has only recently reached a generous financial settlement with his ex-wife, Jo.

There is certainly no doubt that Ana cares for Ronnie and has even been credited with finally getting him to quit drinking, having supported him through the longest period of sobriety of his adult life.

It’s now been 18 months and he says he has ceased even wanting a drink.

They even have a cake together every time he manages 100 more days of sobriety.

But what isn’t clear is why Miss Araujo’s PR should be so keen to portray their romance of almost two years as an engagement? 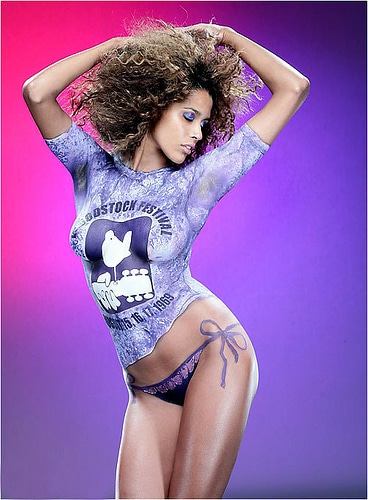 Intriguingly, those who know Miss Araujo say the engagement tale isn’t the only inaccurate story circulating about her.

Take, for instance, the matter of her job.

It has been reported since she first started dating Wood in February 2010 that she earns a crust as a polo teacher at the Ham Polo Club in Surrey.The polo manager Adolfo Casabel is refreshingly clear on the subject, however. ‘That’s absolute bullshit!’ he bellowed this week.‘She doesn’t work here and never has. She is a beginner at polo and she had some lessons two years ago and I haven’t seen her since.’

Indeed, a London friend of Miss Araujo’s tells me: ‘Ana can ride a horse the same way that I can drive a tractor. It’s all complete rubbish. She doesn’t ride well, she didn’t grow up with ponies or anything like that. She comes from a very poor, modest background.’

That’s something which her father, Manuel Pinto, 57, would confirm. He lives with wife Sonia in a three-roomed home near Rio, and earns a living as a painter and decorator. On the surface he appears to approve of his daughter’s romance.

‘We would like to meet him one day. It doesn’t matter that he is older than I am,’ he says.

His daughter left Brazil more than a decade ago. She admits that she worked in a factory, sewing, after she left school at 16. Her father adds that she also had a job selling mobile phones, but that it was boring and poorly paid. So what does Miss Araujo do all day — and how did she come to be a Rolling Stone’s girlfriend?

The surprising truth about Ana is that she is a divorcee, having married a Spanish national. That union — which accounts for her having a Spanish passport as well as a Brazilian one — was formally annulled around a year ago, when her romance with Wood was already well advanced.

She admitted to this early marriage in an interview with Brazilian Vogue earlier this year, but it is not a fact picked up by the British media. 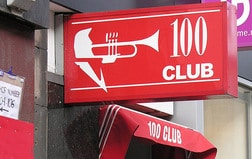 Before she met Ronnie at London music venue, the 100 Club, she was a known face on the capital’s nightclub scene.

Last year, a newspaper alleged that she spent four years working for the UK Glamour Girls escort agency, but she insists those rumours are untrue.

Now, though, it seems her job is to be at her boyfriend’s beck and call.

In an interview this summer, he revealed that they don’t actually even live together, but instead she is allowed to come over to his flat in West London — when she is invited.

It seems that he and Ana have an arrangement whereby he pays for the rent on her flat in South Kensington, and also gives her a monthly allowance of ‘pocket money’.

On top of this, they will at times go shopping together and she occasionally asks him to help to meet other, larger, expenses.

To Ronnie’s great amusement, among these items are wigs which she has recently started wearing as her own hair is so unruly and takes a lot of patience to blow dry. Good wigs cost hundreds of pounds, and he has been heard to grumble that she is ‘high maintenance’ and that he is getting ‘fed up with it’.

A friend of Ronnie’s says: ‘Ronnie has always been generous to a fault. When he was with his previous girlfriend Katia, he bought her 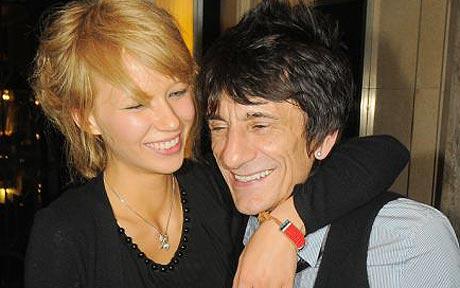 ‘He also set her up in a flat before they ran off together, and paid for everything — rent and bills, the lot. It’s just the way he is.’

Ana is keen to make a splash on her own and, not long after taking up with Ronnie, she signed up with the model agency, Select. But she has been grumbling that they have not been able to get her the big contracts she had hoped for.

Aside from a spread in Paris Match magazine with Wood, she has made barely a ripple.

A friend of hers says: ‘Ana is very ambitious and she wants to be famous, whether she does it as a model or as an actress.’

In a bid to be seen, she pursues a life as a social butterfly in London’s shallow whirl.

She and Ronnie have been everywhere people go to see and be seen — Ronnie was even spotted at the opening night of Shrek in the West End, rubbing shoulders with perennial fixtures of the scene such as dance instructor Louie Spence.

Some of the friends who have known him for years shake their heads at the way he will now turn up to almost any PR event. 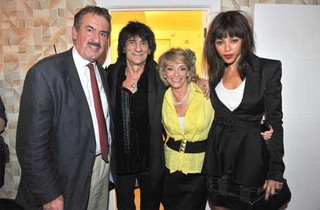 Only last week, he gamely posed at an event to mark the 30th birthday of Only Fools And Horses, while Ana told a reporter that she was working with a voice coach and hoping to make it as an actress.

To another guest, she boldly said she had been for an audition to be a Bond girl, and was down to the last three.

Eon productions, who make the films, decline any official comment but are privately ‘completely nonplussed’ by the reports. Of course, she is not the first aspiring actress to talk up her chances — that is part of the game.

And it seems that Ronnie — who has been busy making a solo album and presenting his radio show — leaves her to her own devices to quite a degree.

Perhaps it is the casual nature of their romance that has caused some spectacularly jealous rows, with Ana suspecting that Ronnie has been seeing other women when she is not around.

At the start of their affair, he was spotted popping over to the flat rented by Katia — full name Ekaterina Ivanova — the teenage Russian girl with whom he had an affair which resulted in the end of his 23-year marriage to Jo.

Ronnie’s spokesman explained that he and Katia were simply trying to be friends again, but Ana was so enraged that she was reportedly taken to hospital following an almighty argument on the subject. It was never revealed, what, if anything she was treated for.

A few months later, it was reported that Ronnie had struck up a close friendship with burlesque dancer Fifi La Bombe, real name Melissa Hammond, after meeting her in a bar and enjoying her performances.

He was even seen popping into Ms Hammond’s East London flat for a 90-minute private conversation one afternoon in June.

No explanation was forthcoming from the star, but it no doubt displeased the notoriously jealous Ana

A friend of Ana’s says: ‘Ronnie and Ana are very fond of each other, he thinks she is the most beautiful creature that walked the earth.

‘But, all that said, she goes into terrible rages because he does attract a lot of attention from women and she suspects that there are other girls who he meets up with.’

Well-placed sources suggest that it is very much an up and down romance.

It was said that Ronnie Wood split up from Ana in February, although the couple took care to be seen together shortly afterwards, looking blissfully happy.

She seems to have no doubt that their romance will last forever. She has talked to interviewers about wanting to have a baby in her late 30s — she is now 32. Never mind that he has three grown-up children, all around her own age; Jesse, 34, Tyrone, 27 and Leah, 32.

‘Ronnie is the love of my life. I can’t wait to have a family — it will happen one day, as children are important to me,’ she said.

Wood said last year that Ana was a ‘good match’, but people who know him well say that he has absolutely no intention of getting married again or having any more children.

For one, he is enjoying his freedom too much.

‘I’ve never been on my own since I was 14, so it’s a brand new experience,’ he said this summer.

‘Before, I was always engulfed with relationships and never had a mind of my own. To finally break away from people controlling you is great. Really great.’

And he already has a best friend — his ex-wife Jo. He still wears his wedding ring, on his right hand.

‘Jo saw it a couple of weeks ago and said: “You’ve still got your wedding ring”  and I said: “Yeah, because you’re my old mate and you always will be.” ’

One can only imagine what the lovely Ana Araujo might have to say about that.