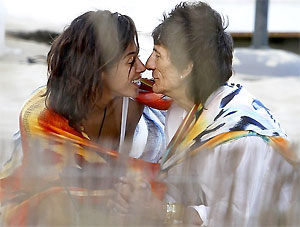 He’s 63 and 30 years older than his Brazilian girlfriend Ana Araujo.

But Ronnie Wood keeps rolling and proves he has the stamina of a street fighting man as he cuddled up to his partner on holiday in Formentera, Spain.

Ronnie couldn’t keep his hands off stunning Ana, who showed off her figure in a striped bandeau bikini, as they made the most of their trip on a yacht called Never Too Late.

Wood, who wore a pair of brightly coloured swimming shorts, looked calm and relaxed on the boat while polo instructor Miss Araujo clung tightly to her famous boyfriend.

The pair looked very much in love as they enjoyed their holiday, and Miss Araujo has already spoken about her relationship with Wood.

She said earlier this year: ‘I love him. He’s a great man. He’s very funny, has a great personality and is very smart. It’s going very well.’

And the pair, who have apparently made plans to wed this summer, have already got the blessing of Miss Araujo’s father Manual Pinto.

Mr Pinto, 57, said: ‘My daughter Ana is wise and intelligent enough to make her own decisions.

‘If she wants to go out with and even marry Ron Wood, I and her family support her. It doesn’t matter if he is older than I am.’

Wood started dating Miss Araujo at the start of this year after they met at the Royal Opera House in London’s Covent Garden and bonded over a shared love of art.

The singer, who has checked into rehab seven times for drink and drug issues 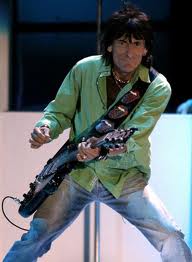 during the last 30 years, claims to have been sober for five months and says it’s all down to Miss Araujo.

He has credited her with supporting him as he pays regular visits to Alcoholics Anonymous and Narcotics Anonymous to ensure he stays on track.

Wood left Jo, his wife of 24 years, in 2008 for Russian cocktail waitress Ekaterina Ivanova, then 19.

The pair split in December last year after a row in the street outside his £5million Surrey home. He later received a police caution for assault.