Pippa Middleton, left at her sister Kate’s wedding and right in a dress made of loo roll, is discovering her party girl past is coming back to haunt her.

As maid of honour for her older sister Kate Middleton as she became Catherine, Duchess of Cambridge, Pippa Middleton became celebrated the world over after almost stealing the show last week with THAT dress.

But today, she is discovering the downside of that sudden fame after a host of websites in the U.S. got hold of some private pictures of the 27-year-old in her underwear…and published them.

At least seven U.S. websites are running the photos showing Ms Middleton stripped to a purple push up bra and flimsy white slip with an half-naked unknown companion doing a ‘bump and grind’ dance behind her.

But she was a student, and if that’s all she ever got caught doing, then she’s a bloody saint. People keep forgetting that she wasn’t born a Royal. The Middleton family, I’m sure, when their children were born, never thought tat they might have to keep all of their family photos under a lock and key. Also, to have to destroy everything before it goes in the dustbin…because the press in the UK will go through their rubbish,even if it’s to see how many bananas the family eat in a day.

After her appearance at the Royal Wedding last Friday, there’s been huge interest in Pippa that she may be struggling to cope with.

Consequently, a host of other pictures documenting her party girl past have surfaced as the public appetite grows to know all about her. 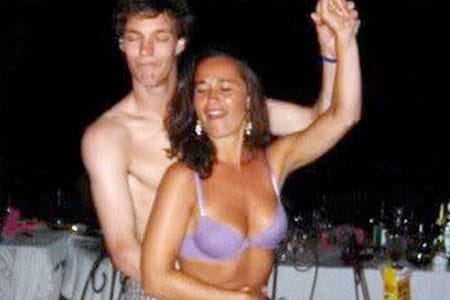 It’s the downside of fame, and is something she will surely discover increasingly as the weeks progress.

Bookmakers today have even started taking bets as to ‘What will Pippa do next?’.

She is at 2/1 to appear on a Vogue cover feature, 3/1 to get married, and 7/1 to model Alexander McQueen, the fashion house that made her sister Kate’s wedding dress and her stunning maid of honour frock on the catwalk.

Meanwhile, her backside has emerged as the 4-6 hot favourite to win Rear of the Year.

Pippa has been working as an event and party organiser since graduating from the University Of Edinburgh in 2007- where most of her partying took place, like a typical student.

Now, she is very much the refined socialite and is currently apparently engaged in all but name to her City broker boyfriend Alex Loudon.

It was revealed earlier this week that the couple have stayed silent about the future of their relationship for fear of detracting attention from Prince William and Kate.